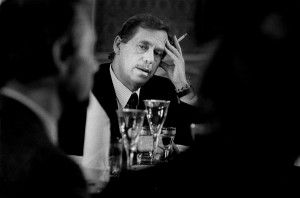 (Obcan Havel, 2008) Pavel Koutecky  had a decade of intimate access to Vaclev Havel during his two terms as president of the Czech Republic, and the cinema vérité result is rich and intense, capturing the virtues as a man that may have made Havel less than an ideal administrator. The portrait of the playwright-turned-politico is only slightly diminished by the hermetic character of some of the distinctly Czech matters being discussed. He’s an agreeably amusing man. After his death at the age of 49 falling from a building in central Prague on another project, documentarian Miroslav Janek came in to finish the film from Koutecky’s amassed footage; a four-hour version has been show in the Czech Republic. With Havel, Olga Havelova, Vaclav Klaus, Dagmar Veskrnova, Milos Zeman, Jacques Chirac, the Rolling Stones, Bill Clinton. 119m. (Ray Pride)