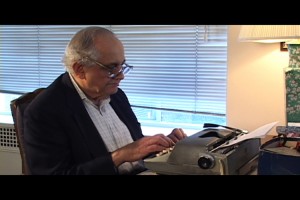 Boston Phoenix film contributor Gerald Peary’s almost-a-decade-in-the making chronicle of twentieth-century American film criticism, “For the Love of the Movies,” provides glimpses of the faces and fracases of that storied time, suggestive of a much larger history that could run to volumes, footnoted endlessly, hyperlinked furiously, contested perpetually. I offer a “Recommended” rating for subject matter alone; having studied and practiced in the dark with film crickets for well over a decade, I’ve got my own hunches and recollections and perspectives on the subject. I can’t imagine a non-practitioner getting much from “For the Love”; there’s too much implied and left unsung about the supposed passions for it to make much sense to the non-pro. And any documentary that gives short shift to the essential syncopations of Manny Farber leaves me rolling eyes skyward. Among the critics under consideration: Roger Ebert, Andrew Sarris, Jonathan Rosenbaum, Michael Wilmington, Gene Siskel, Richard Corliss, Kenneth Turan, B. Ruby Rich, Wesley Morris, Janet Maslin, Leonard Maltin, Stuart Klawns, Harry Knowles, Owen Gleiberman, David D’Arcy, Lisa Nesselson and Karina Longworth. Narrated by Patricia Clarkson. Movie City News’ Michael Wilmington will appear at the Friday 7:45 showing. 80m. HDCAM. (Ray Pride)