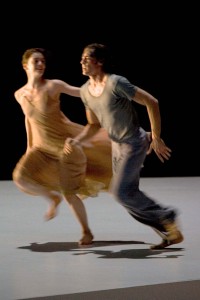 Observing institutions and communities for five decades, Frederick Wiseman offers his most scenic and least sociological film. “La Danse” documents the Paris Opera Ballet for twelve weeks in fall 2007 as the company works on seven ballets. The 79-year-old director–who also records sound and edits but never narrates–states in his press notes: “Since movies are about movement, I wanted to make a movie about a group of dancers and choreographers who represent the highest level of achievement in the conscious use of the body to express feeling and thought.” (Or, as he told the New York Times: “I just thought it would be a good way to spend my time, watching great dancers in action.”) The only titles on screen are English subtitles that rarely “express feeling and thought.” Choreographers and dancers here are much less verbal than the directors and actors in Wiseman’s “La Comédie-Française ou L’amour joué” (1996), where thespians discoursed on their craft at length. “Most socio-materialists misread Sade,” argued one. “La Danse” also contains fewer of the office scenes of meetings and phone calls that Wiseman typically uses to reveal offstage mechanics. In “Ballet” (1995), his documentary about the American Ballet Theater, he observed two reporters interviewing dance-company members who articulated matters unexpressed on stage. Wiseman also omits the drama of Robert Altman’s “The Company” (2003) and Bertrand Norman’s documentary “Ballerina” (2006): there is no romance among dancers, or suspense about a key audition or a tragic injury. Instead, “La Danse” offers disciplined views unavailable to Paris audiences. Cinematographer John Davey, who also shot “Ballet” and “La Comédie-Française,” shoots long takes without close-ups. Never does the camera interpret or prettify the performances. Davey limits his visual creativity to Wiseman’s signature mosaics of exterior shots to mark diurnal cycles. These lyrical interludes frame shadows, the Seine and rooftops for a city symphony on the side. 158m. (Bill Stamets)