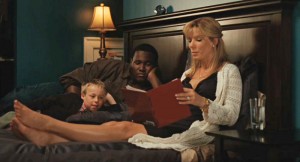 Director John Lee Hancock (“The Alamo,” “The Rookie”) writes an uplift drama based on “The Blind Side: Evolution of a Game,” a 2006 book by Michael Lewis about Michael Oher’s rise from the mean streets of Memphis to a five-year, $13.8-million contract with the Baltimore Ravens. Quinton Aaron (“Q” from “Be Kind Rewind”) plays this giant teen as sweet and shutdown. He’s a rescue by Leigh Anne and Sean Tuohy (Sandra Bullock and Tim McGraw, respectively). This well-off couple brings him home, after seeing him walking along a rainy road one night. “Big Mike” goes to the same private Christian school as their daughter. A one-night stay on the couch leads to legal guardianship, better grades, football glory and courtship by college coaches. “The Blind Side” portrays the Touhys as a personable family, except for the obnoxious son played by Jae Head. Bullock appeals as another plucky can-do gal. “The Blind Side” comes soon after the release of “Precious: Based on the Novel Push by Sapphire,” another account of an African-American adolescent overcoming heartbreaking obstacles. Oher’s story is measurably lighter. Lewis wrote that Oher scored in the ninetieth percentile for “protective instincts.” Hancock increases this to the ninety-eighth. (Who knew the Memphis school system ranked kids by their instincts?) This may explain his stats as a left tackle, thanks to Leigh Anne coaching him that his team is like his new family. The cringe factor is less than you’d expect, although the gradually more graphic flashbacks to Oher’s childhood trauma are cliched. Hancock congratulates the Touhys for their charity and does not get sacked for it. With Lily Collins, Kathy Bates, Ray McKinnon, Adriane Lenox and eight coaches as themselves. 126m. (Bill Stamets)