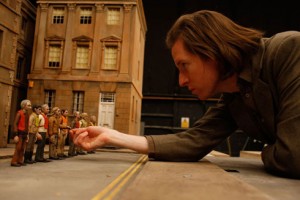 Wes Anderson is seated at a table when I enter a conference room at the Peninsula Hotel and I immediately realize the room’s darkly patterned, deep green wallpaper matches Anderson’s green, narrow-wale corduroy suit, and almost as quickly realize he’s wearing, for a belt, a white polka-dotted green length of silk, mauve socks and Clark’s Wallabees. He’s less dressed than he is art-directed.

In his brisk, new stop-motion animated movie, “The Fantastic Mr. Fox,” adapted with his friend Noah Baumbach from Roald Dahl’s sour little novel, Anderson even invests his titular Vulpus Vulpus (voiced by George Clooney) with a tan corduroy suit patterned after an earlier one of his own. Strangely, it may be the most “Wes Anderson” of Wes Anderson movies: the level of control in the adventures of an animal trying to sustain family life is exacting, but with comic detailing in sets and behaviors that matches the goofball dialogue and the interpersonal dynamics.

When one of the young males intones, “You’re disloyal,” to his cousin, the quantity of hurt and umbrage in the delivery links him to all the other Anderson creations who breathe hurt, who think cultivating a grudge is the stuff of life. “I’m just a wild animal!” is Mr. Fox’s all-purpose excuse. Amusingly, the animals also have an all-purpose swear, “cuss,” which in its iterations takes on as many colors as “fuck” does in its myriad usages. (It even shows up as graffiti on a rooftop in the background of a city-set scene.) It’s gratifying because it demonstrates that profanity is intonation and context. “At one point, there were about three times as many uses of ‘cuss’ in the movie as there are now,” Anderson tells me. “Eventually, we said, you know what, we’ve gone too far. We had to pull it back a bit. It’s ‘cuss’ because… It felt like Dahl to us.”  Still, there’s a wealth of Anderson-Baumbach banter to savor. “I used to steal birds but now I’m a newspaperman”: were truer words ever spoken?

Production was all-consuming.  It’s a standard remark that only the filmmaker holds the movie in progress in their head. Anderson has said that the intricacies of “Mr. Fox” were contained in a hard drive by his Parisian desk, yet his days and nights were more filled than if he had been on a live-action set.  “At the most, there were thirty units going at once. The process is really bouncing along those units throughout the day as they very, very slowly move forward.” That kind of infinitesimally incremental progress would drive some people mad. “The reason it’s not maddening,” the 40-year-old director says, “is there’s so many things to do. There are so many things happening simultaneously. All these units are shooting, there are all these units that are being prepared, and sets being designed, and puppets being developed, and all that work, plus an editorial process, and a storyboarding process that’s still ongoing. There’s so much happening that it’s never about waiting for something to develop. Instead it’s about trying to sort it out and get it shaped in time. Because even though it is moving slowly, it is going to keep moving. Everybody has their deadlines and it’s, can you monitor and manage everything as it’s happening?”

Anderson had a line producer experienced in this kind of work. “Yes, yes, yes. We had a very large group of experts. But it’s a large group of experts doing things in a way they’ve not ever quite done them before. It really was about having it organized. And it’s exciting… It does prevent the boredom, the need for tremendous patience. Instead, it makes it a scramble like any other movie is.” At first hearing, the supervising from afar took on the sound of Francis Coppola directing “One From the Heart” over a loudspeaker from a silver Airstream trailer. “The only thing is, when the actors were working, I was actually physically with them. When this was happening, it happens so slowly that it’s really about having a moment with each person but moving among them continually.  That I felt like I could do much better on my computer. I only spent about one week each month at the actual studio in a year of shooting. The rest of the time, I was sitting in front of my computer from 8:30 in the morning to 11:00 at night. It was fun, it was a really enjoyable way to work, but now I’d like to make a movie where I’m with actors on a set and I can stand up and move around and take a lunch break. It’s so consuming that… I almost never went outside in the daytime, for instance. For a year. It’s a bit crazy… It’s a bit much.” Without that detail, it sounds like a Truffautesque lark, you’re in Paris, you can nip out to the café, walk down the street, moonlight, cheat on this script with another film… “It’s true, my original intention was that I would prepare the movie, and while we were animating it, I would direct another movie. That was nuts. I didn’t understand how involved I was going to want and need to be. That was a crazy idea.”

“The Fantastic Mr. Fox” is now playing at Landmark Century.