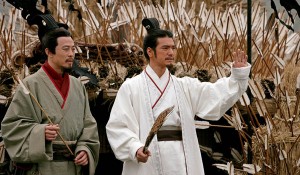 Having seen both the original, two-part, five-hour Chinese version of John Woo’s Chinese period epic “Red Cliff,” set at the end of the Han Dynasty, and the truncated, U.S. version in the past year, my memories of the two are hopelessly commingled. I can at least testify that both are stirring, with majestic moments, but Woo has definitely made choices about what kinds of action appeal to Chinese and the types of diversions that American audiences would resist. China’s most expensive film and Woo’s first in Asia in seventeen years boasts most of the expressive virtues of his vivid visual style, to the point of self-parody. Yet that’s a good thing: his virtuosity, combining hundreds of extras at times with computer-generated imagery, demonstrate the range of his vital filmmaking imagination. (His love of the dove is not neglected, either.) His sense of action choreography is stellar, especially in the climactic extended battle sequence. There’s more characterization and more flying arrows in the longer version, but the American cut still rises above its intermittent choppy storytelling. With Tony Leung, Takeshi Kaneshiro, Zhang Fengyi, Chang Chen. 148m. (Ray Pride)