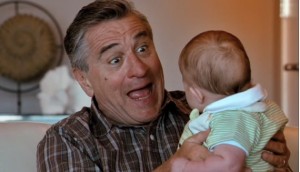 Robert De Niro does well here as a widower and retiree who travels to New York City, Denver, Chicago and Las Vegas trying to see all four of his adult kids after they cancel plans to come home for Thanksgiving. He makes surprise visits to invite each one for Christmas. This seasonal heartwarmer of a road movie remakes “Stanno Tutti Bene” (1990) by Giuseppe Tornatore (“Cinema Paradiso”) where Marcello Mastroianni played the dad. Director Kirk Jones (“Waking Ned  Devine”) sentimentalizes De Niro’s POV when he sees his two sons and two daughters as children in flashbacks. And there’s some disposable suspense about lost prescription medication leading to a hospital room. But Jones aces the awkward pride a dad feels for kids, even if their respective dreams fail to come true. The title refers to the lies and wishes that hold a family together when its members relay word of their well-being at a distance, whether transmitted by the internet or the telephone cables a breadwinner once made. Not to be confused with “It is Fine! EVERYTHING IS FINE” by Crispin Hellion Glover. With Drew Barrymore, Kate Beckinsale, Sam Rockwell, Katherine Moennig, James Frain and Melissa Leo. 100m. (Bill Stamets)