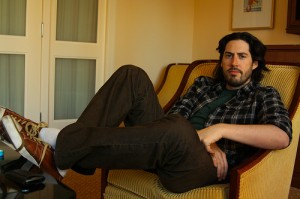 Jason Reitman’s Twittered (@JasonReitman) and Twitpic’d his way through dozens of cities and multiples of belly-busting meals since the Toronto debut of “Up in the Air.” (He’s even kept up a pie chart of frequently asked questions from clipboards nationwide).

He’s almost as peripatetic as his latest protagonist. In his third feature, Reitman adapts Walter Kirn’s pre-9/11 novel to his own themes and interests, about Ryan Bingham (George Clooney), a road warrior who’s a man alone (but not necessarily lonely) who jets most days from small city to small city firing people he’ll never see again. His goal in life: to attain a frequent-flyer status attained by fewer men than those who walked on the moon. A bright young thing named Natalie (Anna Kendrick) has the notion of doing it via iChat, and Ryan takes her on the road to show her the face-to-face reality. Ryan also encounters fellow warrior Alex (apt, adult Vera Farmiga) who shares his statistical friskiness.

In the context of the movie, Ryan’s a regular guy holding onto his job, his status, but he is a guy who goes around firing people, liquidating them. “I don’t like to judge my characters. I dunno, I’m particularly attracted to characters who normally would be judged,” the 32-year-old writer-director tells me on his Chicago stopover. “I mean, I made a movie about the head lobbyist for Big Tobacco, a pregnant teenage girl and a guy who fires people for a living. Not only that, but he also believes you should live alone with nothing.”

Natalie calls out Ryan for his “cocoon of self-banishment.” “You like that one?” Reitman says with a grin. The stagecraft when Kendrick says that is swell, it’s such a big mouthful, then Clooney in the reverse angle raises his eyebrow more than anywhere else in the movie. “She was actually able to say the whole thing. She’s good. I like that reaction.” She’s as precise as she is tiny, she’s like a little exclamation point. Reitman laughs. “I like ‘little exclamation point.’ No one’s ever called her that. I gotta tell her that. She reminds me of Ellen [Page]. She’s totally different from Ellen, but similar in that they’re both kinda tiny and pack a punch.”

In the medium shots, particularly when she and Clooney start to have a rapport, I wonder how much is shot for such precise performance. The cuts are razory, everything is very quietly correct, right for the joke, for the character. “I pick the right actors. Every once in a while you work with an actor who needs lots of takes, but George certainly doesn’t like doing lots of takes and he doesn’t need them. If you do a second or third take on George, oftentimes it’s just a favor to the other actor to make it seem as though, y’know, everyone gets to do a few takes. I dunno. I write my roles for the actors, and because of that I kinda know what I’m going to get out of them.”

But there’s a little bit of overshooting? “Oh yeah. There’s twenty minutes worth of scenes that are cut out. And that’s been on all three of my films. Making a movie is a constant refining process where you have an idea, then you write a shitload and then you go to shoot and shoot a bunch of scenes, then you edit… You find the movie as you make it.”

What does the underbrush, the stuff that you’ve shot but pare away, what do you think that’s doing for you? To find a tone? “I know what the tone’s going to be. That’s probably the thing I know best going into a film. It’s more, just what do I need to convey the story. How much do I need to convey an idea and get you to believe something? And I want to show as little as possible to get that idea across.”

This is the second time Reitman’s used a book (as well as Diablo Cody’s  original screenplay for “Juno”) as a sounding board, as an unargumentative collaborator. “That’s actually perfectly put. That’s exactly why I like working, adapting a book.” A sounding board that makes no sound. “Yes! It’s perfect! It’s a collaborator who doesn’t say anything, who doesn’t argue about anything”—he chuckles—”who accepts every choice you make! God, that’s perfect. I know exactly how to answer that question from now on. People always ask me why I adapt. But that’s exactly it!”

With a pleased smile, Bingham tells one seatmate, “I’m from here.” And the reciprocal obsequiousness of the air crews he meets seems particularly topical, because they know you have a choice in air travel. “And we are actually grateful that you chose us,” Reitman agrees. He shares some of his character’s experiences. “It’s funny, I’m at a level of membership right now, I’m at an invite-only level of status on my airline and twice now pilots have sent me a note, they’ll write it on their business card, thanking me for choosing their airline. I thought that was kind of cool.”

“Up in the Air” opens Friday.