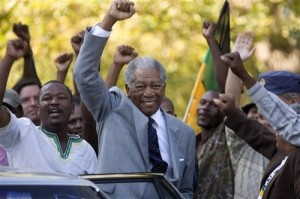 Already in production on a new thriller, Clint Eastwood, nearly 80, still impresses with the strength of his filmmaking acumen in the straightforward inspirational drama, “Invictus.” A classically fashioned crowdpleaser, it’s a tale of how Nelson Mandela (Morgan Freeman), after his release from decades in South African prisons, hoped to start repairing the racial rift after the history of apartheid by encouraging a white rugby team in its mission to win the 1995 Rugby World Cup. Matt Damon plays the Afrikaner captain Mandela must convince. The drama is polite but the implications touching. There’s a stirring film to be made with such material, but it’s a marvel that “Invictus” even got financed and distributed through a major studio. Eastwood still has tricks up his sleeve. The climax, bringing sports-crazed fans of both races together, is a modest joy. South African screenwriter Anthony Peckham based his script on “Playing the Enemy: Nelson Mandela and the Game that Made a Nation” by John Carlin. With Scott Eastwood, Robert Hobbs, Langley Kirkwood, Bonnie Henna, Grant Roberts, Patrick Holland. The title comes from an 1875 poem by William Ernest Henley, apparently much beloved by conservative essayists. 133m. Anamorphic 2.40 widescreen. (Ray Pride)