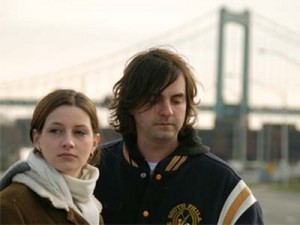 Tom Quinn’s genial, four-years-in-the-making “The New Year Parade,” winner of a Slamdance jury prize, is a study of the effects of divorce on the members of one South Philadelphia family across the course of a single year. Set in the world of Mummers, or competitive marching bands, Quinn’s great stroke beyond marshaling the time scheme of the film is getting the motions (and emotion) of hundreds of musicians on screen in such lucid fashion. The seemingly improvised performances have a sweet, ragged edge, and the music swells. Nothing musical on film has touched me the way the first viewing of “Once” did, but “The New Year Parade” is a song in the heart. With Greg Lyons, Jennifer Welsh, Andrew Conway, MaryAnn McDonald, Irene Longshore, Tobias Segal, Paul Blackway, The South Philadelphia String Band.  90m. (Ray Pride)