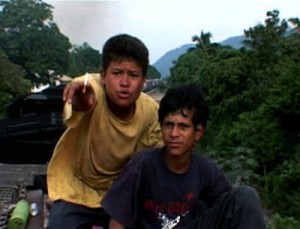 For the years-in-the-making “Which Way Home,” documentarian Rebecca Cammisa followed a rarely acknowledged class of immigrants (children traveling without their parents, alone or in bands). The kaleidoscopic portrait, filmed on the run, of tenacity and of dreams that hardly encompass obstacles to come is a study in fervent belief. As demonstrated in her 2002 “Sister Helen,” Cammisa is a gifted observer. The romance of the freight train, lost in the contemporary United States, is revived. Thrilling and terrifying. The film’s producers include John Malkovich’s Mr. Mudd and HBO. 83m. (Ray Pride)