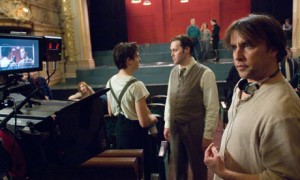 With “Me And Orson Welles,” co-producers and co-writers Holly Gent Palmo and Vince Palmo make their debut by adapting Robert Kaplow’s 2003 novel of the same name for a polished coming-of-age film. The “me” of the title is Richard (Zac Efron), a fictional 17-year-old New Yorker skipping high school classes to play Lucius in Orson Welles’ historic 1937 staging of modern-dress, Fascist-Italy set  “Julius Caesar” at Manhattan’s Mercury Theater. In a finer impersonation than Vincent D’Onofrio and Liev Schreiber achieved in earlier films, Christian McKay delivers a stagey yet engaging turn as he impetuous, petulant Welles. The backstage drama of mounting a Shakespeare play with Mussolini allusions, and Richard’s liaison with Welles assistant and paramour Sonja (Claire Danes) make for a credible account of moral compromise for the sake of art. Welles is as much genius as jerk here. He comes off as a charismatic philanderer who swigs pineapple juice and toys with his cast by cooing such sweet nothings as his oft-used line: “You really are a God-created actor.” Director Richard Linklater (“Slacker,” “A Scanner Darkly”) creates an appealing period piece much like his overlooked “Newton Boys,” another history-based take on maverick American careerism. With Zoe Kazan, Eddie Marsan, Kelly Reilly and James Tupper. 113m. (Bill Stamets)