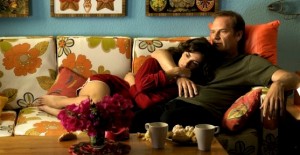 (Los abrazos rotos) Built upon an even more story-within-story structure than most later Almodóvar movies, “Broken Embraces” seems to reflect personal issues about art and mortality in pessimistic fashion, yet the brio of the filmmaking is undiminished. Almodóvar creates a film with a writer and director who’s blind, who mourns the loss of his great love in the same accident that took his sight. The giddy gamesplaying—elegantly demonstrating bad filmmaking—is enlivened by Penélope Cruz, more at home than in other films she’s in this year, her vivid, squishy features and darkly liquid eyes are mischief itself even when she strives to capture the essence of bad acting. She’s tiny and regal and vivacious. As for Almodóvar:Love, loss, cinema: the customary dazzle. With Blanca Portillo, Lluís Homar. 109m. (Ray Pride)