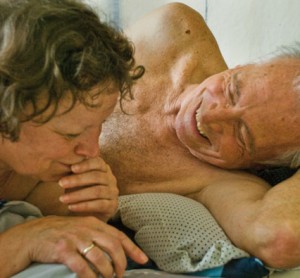 East German director Andreas Dresen looks at love in later years in “Cloud 9” (Wolke Neun), a story of an affair and all it entails and enfolds between lovers of a certain age. Seamstress Inge (Ursula Werner) is a married 67-year-old; customer Karl (Horst Westphal) is 76. Sparks fly over a pair of freshly altered pants, which don’t stay on for long. It may be the most sustained explicit depiction of elder sexuality, shown with glee, abandon, desire, but eventually all such tales, especially when adultery is involved, are covered by morality and retribution. Still, until then, the simple, poetic appreciation of human contact is rich and Dresen’s quiet, lyrical moments are memorable. Werner’s performance is notably bold, too. 98m. (Ray Pride)