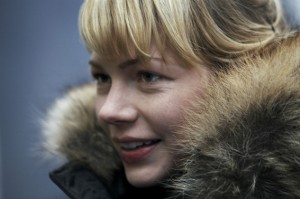 (Mammut) Lukas Moodysson worries for the world but not the chance of his own embarrassment: while “Mammoth” is at its weakest points of inspiration only so much Babel, the Swedish writer-director does strain with intermittent success toward the lyrical. Leo (Gael García Bernal) is a childish videogame designer about to seal a deal in Asia, leaving wife Ellen (Michelle Williams) in their New York City loft (crafted and shot in Sweden rather than above Soho streets) with their 8-year-old daughter and Gloria (Marife Necesito), their Filipino nanny. Moodysson intercuts New York life with Leo’s lollygagging in Bangkok and Gloria’s small boys back home, who long for their mother. Child endangerment, prostitution and the threat of child rape ensue. Actions have consequences. Screenplays have structure. Undercooked moralism thuds. Moodysson’s concern for the life of the child shines in movies like “Show Me Love” and even the grim “Lilja 4-Ever.” His themes are more forced here, and the surroundings of the characters, the production design of the rich couple’s pampered environs versus shanty life everywhere else speak more profoundly of a world of unequal opportuity. Bourgeois, beware! Moodysson’s English-language dialogue is overwrought, but Williams, especially, inhabits it. A doctor of children oblivious to the children of the world until they bleed out in her E/R! Still, that heavy-handedness lands with a soft thump alongside her capable features. The music score draws on songs by Ladytron and an oddly placed Cat Power tune. And, in a year of chilling, apt endings, the last line of “Mammoth” is in a class of its own: it’s perfectly demonstrated that someone has learned nothing. Then Chan Marshall plays. 125m. (Ray Pride)