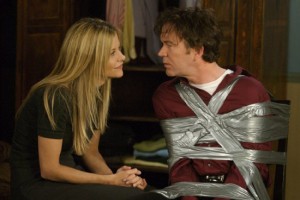 In their unlucky thirteenth year of marriage, Louise (Meg Ryan) and Ian (Timothy Hutton) cross paths at their country house. She arrives earlier than expected to find he has set up a rose-petalled tryst with his 24-year-old girlfriend Sara (Kristen Bell, “Forgetting Sarah Marshall”). Ian planned to leave a letter informing Louise that he was filing for divorce and flying to Europe with Sara. Instead, the spouses spar and spat. One head injury later, Ian awakes wrapped in duct tape. Louise interrogates him about their marital crisis. Another head injury renders her unconscious, leading to Todd (Justin Long, “Drag Me to Hell”), a home invader on a riding lawn mower, to ask Ian, now duct-taped to a toilet: “Shit, nice tits. Mind if I touch them? God, I could never get sick of these.” Then Sara turns up and gets tied up too. Further tit-fondling does not ensue. The script by the late Adrienne Shelly (“Waitress”) is directed by Cheryl Hines as a romantic comedy of remarriage with extreme mood swings toward the misanthropic property lines of Michael Haneke’s “Funny Games.” The late Rainer Werner Fassbinder might have done justice to the image of marriage as prison, with the wife as warden, but Shelly and Hines deliver a peculiarity that only ponders the cliche of temporary loss of consciousness for comedic expediency. With Andy Ostroy, Nathan Dean and Kimberlee Peterson. 85m. (Bill Stamets)