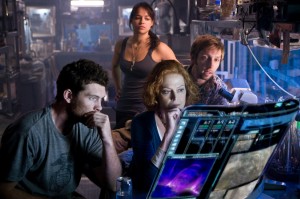 Novelist Barry Hannah says it well:  “I really want stories that are rippers in the old sense. Tales of high danger, high adventure, and high exploration.”

And has that been what James Cameron’s been conjuring in his fevered imagination for as long as twenty years, a true ripper? Of all the things that can and will be said about “Avatar,” is that it’s the one 2009 feature drawing from the War in Iraq that could make a mint. While his ex-wife Kathryn Bigelow’s “Hurt Locker” is the best American movie about war in movies this year, and is racking up year-end critics’ nods, it didn’t blow up at the box office.

Even if James Cameron had spent $200 million-plus on a trainwreck the equal of the Icelandic economy, that would have been gratifying, even at the cost of encouraging the wisenheimers who, without seeing the film, invoked the Smurfs, “Ferngully: the Last Rainforest” and something called “Delgo.” All the pessimistic early jabber made it seem like this would be the in-flight movie that you would see on the way to become part of the Matrix. Of course, virtually no one had seen the movie until its Thursday night premiere in London and its staggered press screenings in the U.K. and North America. Then the lights went down, time passed entertainingly, the lights came up, the Twittering began, and within hours an embargo against reviews before opening day was lifted.

It’s a blast. Alfred Newman’s monumental Twentieth Century Fox fanfare is always good for a small chill, but Cameron’s 3-D effects are there from the first frame, and the trademark symbol for the searchlight logo loiters in front of your eyes, a ® you could cup your hand around.

It’s 2145. Jake Sully (Sam Worthington) is a former marine who’s lost the use of his legs. His twin brother had trained to travel light years away to a moon called Pandora, where a Blackwater-like mercenary group is clearcutting the planet. The Pandora box that the otherworld warriors open on the distant moon is natural reserves, or “Unobtainium,” an energy-bearing mineral that could save Earth. Brother dies, Jake’s swapped in: DNA’s close enough. Cameron dramatizes the idea of the “Avatar” well enough, even if it’s hard to explain, even in the press kit: “human “drivers” have their consciousness linked to a remotely controlled biological body that can survive in the lethal air. These avatars are genetically engineered hybrids of human DNA mixed with DNA from the natives of Pandora, the Na’vi.” Here’s one of Cameron’s bold strokes: he can intercut between the computer-generated event-foot feline blue-skinned Na’vi and the “real” worldly, just as he did with the twinned narratives of “Titanic.” And, Jake’s bulling into the “avatar” role without training is like any gamer who sits down to a new simulation, confident they can bluff their way through it.

Cameron’s built the world and the war machines from the ground up: almost everything’s been created in the computer. Maybe even some of the dialogue, like Quaritch, Stephen Lang’s gruff, sculpted Marine commander, admiring Jake’s C.V.: “Venezuela, that was some hard bush. Three tours of Nigeria!” The tympani at the back of tympanic membrane sounds… oil… oil… oil. If you don’t know about those countries’ energy reserves, the information passes as Lang’s bluster; it also announces the political text of Cameron’s interspecies romance-Iraq/Afghanistan wars-American vs. Indian wars-anti-colonialism epic. Cameron goes so far as to allow the phrase “shock and awe” into the dialogue, long minutes after fireballs have done their duty.  The metaphors and insinuations clash, but part of the extended battle scenes at the end of the film suggest it’s the mercenaries who are taking down the Pandora equivalent of the World Trade Center; a forest with a trudging figure filled with fluttering ash and soot only cements the allusion. If someone’s taking your resources, killing your children, “Avatar” seems to ask, is Jihad all right then? It’s a romance and a pamphlet!

Technically, the results of Cameron’s visual imaginings are stunning. He’s a visionary of the technical realm. The fauna of Pandora suggest another element present in the visual design, but not in the plot: crushed, dried, infused, powdered, inhaled, smoked, all this lively plant life would likely bear major hallucinogenic oomph. How often do you feel the pull to put production design in your mouth? (If Oskar Fischinger had been a horticulturalist and not an animator, he’d breathe them in deeply, too.) Cameron’s editing is dynamic, his camera movements fluent. He’s a born filmmaker.

There’s never been enough money in filmmaking to host more than a handful of grandiloquent visions, and there is even less today. There are many, many more dreamers than there are $80 million-plus budgets. And far, far fewer visionary financiers. James Cameron proves again to be one of the safest bets when you’re betting the house, the kids, the grandparents’ house and the future of both your company and your industry. “Avatar” isn’t the harbinger of anything: it’s too costly and requires a perfectionist of Cameron’s manic stripe. Will this thin-sliced cross-section of Cameron’s brain collect enough “oohs” and “ahhs” to make its vast investment back? High adventure: high risk. It’ll be an interesting Saturday morning at Fox base camp on Pico Boulevard.