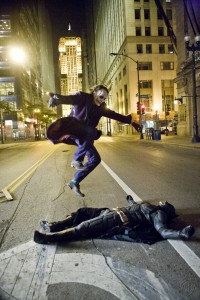 Ten years is greater than the blink of an eye. Trying to fashion some sort of great overarching structure for an arbitrary patch of lifetime always leaves me like the kid at the end of “Kids,” who wakes from a ruckus to ask, “What just happened?”

How do you summarize a city’s decade of filmmaking and filmgoing that starts with John Cusack the quavering voice of a generation in “High Fidelity” but finds him as dad-bait in “2012” in 2010, while once-perennial sidekick Jeremy Piven is an Emmy-winning star-and-a-half? There’s an epic tale right there.

Chicago could be the most cinematic of cities, if you look at Michael Mann’s “Public Enemies,” slavishly recreating Lincoln Avenue of the Dillinger era with some pricey set dressing, but hardly having to build a thing, or if you fly with “The Dark Knight” into the gleaming sky. There are  two movies that understand  the great city, burned to the ground, its skyline rising from ashes.

As for moviegoing in the decade, a new swanky digital cinema’s opened last Friday in the South Loop, boasting “projectors that can display 35 trillion colors on the screen.” But the aisle seats have stayed comfortable at the Siskel Film Center, Facets and the Music Box, which has also branched out into one of the few new, and very successful, film distributors. New Midwestern filmmakers using new technologies are working from the outskirts to the center, and the coming months of a new decade will see more of the prolific stripe of director Joe Swanberg, who’s been improvising story and career for the latter half of the 2000s.

But, still: the blink of an eye.  And not just the stories-high yellow eyes of James Cameron’s Na’vi maneuvers in digital sensation “Avatar.” In the 100-plus years of cinema, movies have been about the blink of an eye. Before digital projection began to make inroads, movies were twenty-four blinks a second, alternating with twenty-four frames a second. A mechanical solution to the hope of dreaming with eyes wide open. Those blank, black spaces are where the stories take place, projected on celluloid on a big, big screen.

Technical evolution has hurtled and tumbled, and honestly, stumbled forward since 2000, ranging from immersive videogames, to Playstations and Xboxes, to iPods, to YouTube to films produced and exhibited on high-definition video. The economic news of the making and consuming of media is also convulsive. Read the newspaper, go online: crisis is the cry. Observing that Bergman and Antonioni died on the same day is suggestive enough about the 2000s. These were the zeroes, those were the ones.

I made the mistake of reading some of the earliest decades-in-review essays and lists that were posted online: some beautifully written and imagined, others rehashing the things we all know. Some seemed hard-pressed to convince themselves the “aughts” were not for naught, even if their editors made them use that strange word. (Never buy your hall of mirrors at the five-and-dime.)

Starting from an inventory of around 300 titles, I hoped to avoid the tendency to group films by influence, technical or esthetic, something A. O. Scott did very well in the New York Times a few weeks back. But you’ll find some of the reasons in the capsules in my best-of-the-decade piece. The twenty-five, drawn from a likely 3,000-plus films seen in the past decade, aren’t so much driven by politics or plot, but are instead  illustrations of startling or intractable beauty, not scaffolding for an imperious pantheon. At the movies, I like apples, I like oranges. I like enigmas. The venerable finite narrative bursting with implication. At the fiftieth anniversary of the Thessaloniki International Film Festival in Greece last month, the Greek celebration bannered and bantered the notion, “Why Cinema Now?” “How Cinema Now?” was a variation one American independent director sounded; the best retort came from Jim Gianopulos, the co-chairman of Fox: “”Why cinema now? I don’t even understand the question! Cinema always!”

Sound and light and color and tempo and dreamscapes. Bursts of beauty, inexcusable, inexplicable stirrings of desire and satisfaction that can only be expressed in this lovely, unshapely catchall medium. A slap to our bottoms, a pinch to our cheeks that says, we are in this together. But mostly? I want suffocating beauty. I’ll elaborate on how each of these films offer that, or as Stephen Malkmus remembered a late friend in the haunting song “Church on White,” “everything, plus everything, and the truth.” As in beauty as paradox, irreconcilable, as in the Oscar Wilde observation along the lines, beauty is more valuable than science, for it requires no explanation.

As with any ranking like this, a few shifting factors—personal thrills, social importance, relevance to changes in the medium—would shift things around if it were revised in a month or a year. My list is light on 2009 films. Will “The White Ribbon” or “The Hurt Locker” stand the test of time? Ask me later; maybe even right after Christmas.