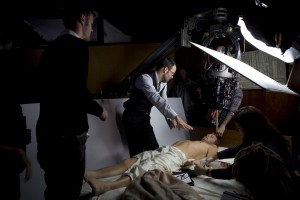 When Hitchcock met Wong Kar-wai, shivering in the sea: one fateful day, one single day in the early 1960s—November 30, 1962—California English professor George Falconer (Colin Firth) considers suicide. Grief’s overtaken him. He tidies his life. He remembers Jim, the love of his life he’d lost (Matthew Goode). George is middle-aged-to-fading, a horn-rimmed gent abrim with melancholy. Designer-turned-director Tom Ford, in his feature debut, works with insistent detail and insistent characters in adapting Christopher Isherwood’s small, fine stream-of-consciousness novel. Colleagues and his circle of friends (especially Charlie, a brittle socialite played with relish by Julianne Moore) want to lighten his burden. George tries to check his currents of sorrow with Bayer’s and whiskey. A blond young student (Matthew Hoult) seeks his attentions. But he’s weighted, and Ford’s visual style is freighted. The intent design, however, is less about Mammon than about Memory. Working in a variable color palette, with hues of blue pulsing like Hitchcock’s shades of green in “Vertigo,” Ford’s play with subjectivity intrigues. Striking images abound, such as the teacher of words with his mouth mottled by black India ink. George stops to sniff a stranger’s terrier inside a car: a whiff, a twirl of desire. He references the “smell of buttered toast,” reminiscent of poet Philip Larkin’s infamous line about Englishness, about “listening to the church bells, eating buttered toast with cunty fingers.” This is life, and he’s leaving it. It’s a modern world he lives in, just not ours. Ford also measures lovingly attenuated homoerotic gaze, especially in a scene that mingles a fading “Psycho” billboard with the vision of a Spanish, James Dean-like hustler. What heterosexual filmmaker has shot a sustained heterosexual dance of desire in such a way? (Other than Wong Kar-Wai.) It’s all Almodóvar now, baby blue? No; Ford’s found his own way. Stlll, there are moments where the actors have their extended play, especially in a splendid passage where George reacts to the news of Jim’s death. Firth’s face is a study in emotional depths. The score, credited to Abel Korzeniowski and Shigeru Umebayashi, moves from stirring Bernard Hermann pastiche to “In the Mood for Love”-like tip-toe of a waltz, appropriate considering Umebayashi’s contribution to that WKW film. Equally important is Leslie Shatz’s sound design, where the tock of clock is like the flick of time. Young cinematographer Edward Grau’s images are impeccable, abounding in influences (an ICE cooler with bold red letters in parching, falling California afternoon light, a Ruscha-slash-Eggleston that never was) but stylistically consistent, always adroit. 101m. Anamorphic 2.40 widescreen. (Ray Pride)