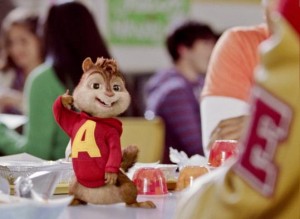 The high-treble irritation of “Alvin and The Chipmunks” (2007) is now doubled. The original trio of chirpy brother chipmunks hooks up with a female trio of conspecifics breaking into showbiz billed as The Chipettes. Global pop squeakers and animated critters Alvin, Simon and Theodore are on their own after two mishaps with wheelchairs put their live-action human caretakers in the hospital. Feckless slacker Toby (Zach Levi) sort of looks after the boys who enroll in high school. The message is sacrifice personal opportunity for the sake of sibling solidarity: a boy chipmunk is shamed for playing on the football team and a girl chipmunk is shamed for wanting to open solo for Brittany Spears. All six end up squeaking in sync and then sleeping in matched bunk beds. Betty Thomas (“The Brady Bunch Movie”) competently directs a contentless screenplay by Jon Vitti and Jonathan Aibel & Glenn Berger. The only reason to see this is the off chance that the frequency of the chipmunks’ chatter kills head lice in kids and liquefies hardened earwax of their grandparents. With David Cross, Jason Lee and Wendie Malick; and the voices of Justin Long, Matthew Gray Gubler, Jesse McCartney, Amy Poehler, Anna Faris and Christina Applegate. 91m. (Bill Stamets)