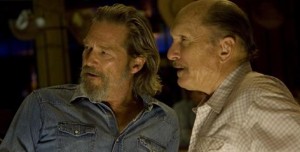 It’s fishbelly-white season at the movies this Christmas: Alec Baldwin’s proud expanse of barrel chest is topped by Jeff Bridges in the small marvel, “Crazy Heart.” Bridges is Bad Blake, a country musician who proclaims his age both as badge of honor and defensive reflex, chain smoking and bourbon boozing from gig to gig in southwestern backwaters sometime around the late 1980s. Lank of locks, he’s got the iconic Kristoffersonian look down, but musically he’s a bit more rascally—Bad flinches ever-so-slightly to a comparison to Lefty Frizzell launched by would-be journalist Maggie Gyllenhaal. The music, performed by Bridges, is more than serviceable, and written by T-Bone Burnett. That’s one of the many minor choices writer-director Scott Cooper gets so right: this is the kind of adult drama, quietly observed yet never winsome, that American movies seemed headed toward with the output of most of the 1970s. Television’s taken that turf (and “Crazy Heart” was largely financed by Country Music Television) and your run-of-the-mill low-budget independent film lacks the elemental craft the pros bring to Cooper’s splendid directorial debut. It would’ve made a great Sundance 2010 curtainraiser, if that festival hadn’t dispensed with that tradition, and if the distributor weren’t wisely slotting the movie in at the end of the year to shine a light on Bridges’ beautiful performance. A number of Oscar slots seem locked down already; see this, and you know a little something about the Best Actor nod. Driving, Bad seldom buckles up: not the seat belt, but his pants. The image of him bare-chested and barrel-bellied to the open eye as a freight train ambles on by, too, has wit and poignancy. The small roles are cast with assurance, and Gyllenhaal works with little bursts of tremulousness that shows her her character dances in the world from moment to moment. Her tossed-off delivery about a blush, “Wall, I can’t help it, my capillaries are close to the skin,” is as sweet as it comes. It’s a tender mercy. Robert Duvall, who has a small role, is one of the film’s key producers. 111m.  (Ray Pride)