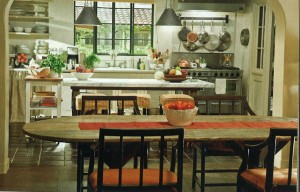 Is there life after divorce? Is there life after life torn apart? Writer-director Nancy Meyers (“Something’s Gotta Give”) says there is. The doyenne of this Sunday’s New York Times Magazine has grown into her role, bringing a fresh signature to the screen with her sunny wish-fulfillment fantasies. On the surface, her films like “Something’s Gotta Give” can seem like facile gloss on the secret lives of lonely multimillionaires—Diane Keaton’s playwright in that film would have to have written “Cats” and “Phantom of the Opera” to live the way she did—yet for all its aggressive sunniness, the deeply satisfying comedy “It’s Complicated” is, and is also streaked with deep, mature melancholy. While Meryl Streep’s baker-divorcee’s kitchen in the house where she now lives alone is strewn with enough produce across its marble cutting table to choke an Italian market, she’s aware of mortality, her children’s life without her, the passing of time, the decade since she and husband Alec Baldwin were together, until the advent of the pro forma younger woman. She lugs her Arrowhead water refill, pours from Pellegrino, visits luxury hotel bars lit just so to highlight an above-eye-level array of bottles of Reyka vodka. What’s beguiling is that the romance—sixtyish woman desired by both ex-husband (Alec Baldwin) and new architect (Steve Martin)—is wish fulfillment, yet it’s so fulfilling. This is what life in such settings ought to be lived like; passing over the fact that Baldwin’s character is cheating on his wife, with, um, his ex-wife? Wait, that’s the stroke of narrative genius: romantic comedy requires fresh obstacles with each generation, and that’s certainly new. It’s not twenty minutes in before Baldwin and Streep have bedded after the swellest, drinkingest night, but beyond the beaming joy the performers are having (hello, daughter Zoe Kazan!), there’s just lusty gusto everywhere. The R rating is supposedly for an extended scene of Streep and Martin smoking marijuana with neither of them dying bloodily afterwards, but there is something to be said for the morning after where bountiful Baldwin clutches Streep’s crotch and crows, “Ah! Home sweet home!” There’s no place like it. Especially when it’s landscaped with Baldwin’s ample acreage, man in late fall, chunky as the San Bernardino mountains: women do see men, they do. A not-so-secret key to “It’s Complicated”: Meyer’s dealing with her own life, her break from director husband Charles Shyer, whose career has nose-dived as hers has bloomed, both in terms of skill and certainly in terms of box office. Instead of sour grapes, she’s fashioned a nice wine with unexpected frisky notes. I like the taste. I like the aftertaste better. 118m. (Ray Pride)