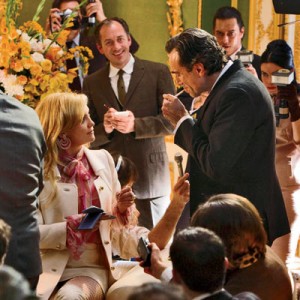 “Nine” is one of those rare movies that remind you why a word like “agog” was confected. I was agog. That is not a good thing. Moment to moment, with no sense of rhythm  or pacing, adapting unmemorable songs with uninspired lyrics, Rob Marshall’s film plays out like a music video for the desire for Oscar nominations. Drawn from the 1983 musical by Maury Yeston, Arthur L. Kopit , Mario Fratti, “Nine” lacks one collaborator: director Tommy Tune. Yet an amateur production in Kalamazoo or Tucumcari would likely carry more heft, goose more oomph. Ironically, in making a movie musical of the material drawn from Fellini’s immortal, and apparently, inimitable “8 ½,” Marshall and his collaborators have made the material more claustrophobic than it could ever have been onstage. I’d consult my notes from the screening to chronicle my astonishment at this debacle, but it would take hours to decipher the full book of mad scrawl. Daniel Day-Lewis plays Guido as a cipher of a compulsive liar, fascinatingly inward but ultimately a loner who would not have the women striking the onstage poses—mother Sophia Loren, creative amanuensis Judi Dench, wife Marion Cottilard, Vogue journalist Kate Hudson, beach wench Fergie, icy muse Nicole Kidman, no match for any of Fellini’s buxom demiurges—hanging every instant over his proclaimed yet never demonstrated genius. Cotillard, who has two numbers, seems to have been helicoptered in from another movie, one with a vision or perhaps just a director. The things that woman does with those eyes, that face! Her final scene in “Public Enemies” may be the heartbreaker of 2009, but a bigger one is that waste of her electric turn in this dim array. She can’t win the war: Rob Marshall sunk that battleship. 110m. (Ray Pride)