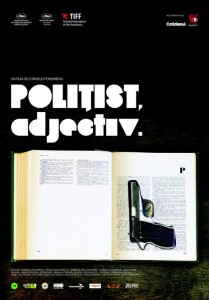 (Politist, Adj., 2009) Where did these Romanians get their sense of humor from, aside from the last seventy years of history? Oh, right. Writer-director Corneliu Porumboiu, whose 2005 “12:08 East Of Bucharest” demonstrated a sly sense of humor in its sendup of cultural memory, turns his eye to the present day. Cristi, a veteran police detective, wants a peaceful life with his new wife and his bosses. He’s assigned to keep an eye on a teenager who’s a pot-smoker they think can be busted for dealing with a cartel. Differences of opinion ensue, including a climactic scene that brings new meaning to the joke that it would likely be entertaining to watch great actors read the phone book aloud. Sardonic, dour and very funny, “Police, Adjective” is a thoughtful jape.  With Dragos Bucur, Marian Ghenea, Vlad Ivanov, Irina Saulescu, Ion Stoica. 115m. (Ray Pride)