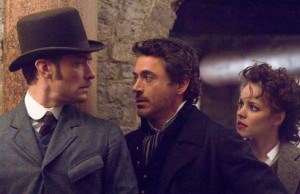 Robert Downey, Jr.–or Warner Bros. publicists using him to channel a crossover high concept to highbrows–dubs Sir Arthur Conan Doyle’s character Sherlock Holmes “an intellectual superhero.” Downey fans will deduce he can once again play a damaged charmer and loner with arcane tastes, wizardly expertise, a self-destructive appetite and a social disability or two, and a kinky likelihood to find himself tied up. Downey excels here as a freelance sleuth and scallywag in an 1891 London littered with murdered young women that recalls the 1888 London of “From Hell.” The 1866 London of “Steamboy” and the 2020 London of “V for Vendetta” also come to mind for resonant themes of empire and regimes of fear. Guy Ritchie directs a snappy screenplay by Michael Robert Johnson, Anthony Peckham and Simon Kinberg that sports such dialogue as “My clay pipe should service that ambition”… “You do know what you’re drinking is meant for eye surgery?”… “No girl wants to marry a doctor who can’t tell whether a man is dead or not.” That last line is meant for Sherlock sidekick Watson (Jude Law), just returned from the Afghan war and betrothed to Mary Morstan (Kelly Reilly). Period detail includes protestors bearing elegantly mounted banners and a chase down a carnivalesque alley rather like the Fellini-inspired cover Joel Brodsky shot in NYC’s Sniffen Court for “Strange Days” album by The Doors. The baroquely sinuous conspiracy at hand involves a cult in high places launching a New Order with designs on conquering England’s former colonies across the Atlantic with fake black magic aided by radio-controlled chemical weaponry. “Sherlock Holmes” assures Downey future employment in another serial like his sequel-friendly “Iron Man,” a like-minded ‘intellectual’ action franchise. With Rachel McAdams, Mark Strong, Eddie Marsan, Robert Maillet and Geraldine James. 128m. (Bill Stamets)