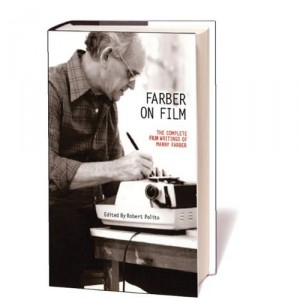 As I write, I am surrounded on three sides by books; one window looks out onto the horizontal play of snowfall. Inside it’s warm: books do furnish a room.

Ways of reading and ways of writing are shifting; that opening paragraph’s fourteen characters too long to Twitter. Whatever to do! From the cool hearth glow of computers and laptops, rampant idle bloggotry is committed every hour of the day and night. Everybody’s writing about movies even if no one’s making a remunerative career of it for the moment. Scanning these bookshelves, especially of the titles on film from past decades that seemed important enough to acquire, alphabetize and dust, I wonder how many tomes on the subject will be committed between covers, hard or soft, in coming years. The tacky tens: the decade when the listicle became literature!

For me, the year’s most important film book is “Farber on Film: The Complete Film Writings of Manny Farber” (Library of America, $40). A definitive collection of the great critic’s lifetime achievement, its 800 pages of perceptive prose accuses me from across the room: it took a lifetime to write, I can take a few months to steep in it. A major disappointment was Richard Brody’s “Everything is Cinema; The Working Life Of Jean-Luc Godard,” (Metropolitan, $40), the best passage of which was excerpted in the New Yorker with a large black-and-white production still of a youngish Godard directing “Breathless.” As the book progresses, it becomes a mash note turned sour, the screws tighten, the author’s dislike of his subject growing more intense as the years rush past increasingly fast. So it was a pleasant surprise a few months later to read Mitchell Zuckoff’s “Robert Altman: The Oral Biography” (Knopf, $25), which manages to feel sly yet ragged, comprehensive yet maddeningly incomplete, very much like Robert Altman’s films, and apparently, his cussed life. Time magazine’s 76-year-old would-be eminence grise, Richard Schickel, took the occasion to bash the director’s work and inebriate ways. The errant blowhard had much less to say about the book. Zuckoff’s knowing ways are evident in the way he deals with Warren Beatty, offering the champeen ditherer his say, then following up with co-workers who had problems with him but not with Altman. Throughout, many of the anecdotes are melancholy, others infuriating, others excellent twinkles. To wit: Altman and Tim Robbins were “relaxing” to come up with an ending to “The Player,” and recalling the end of “M*A*S*H,” where the credits are spoken on the loudspeaker, Robbins relates that he suggested the screenwriter pitch the movie we’ve just seen. “Bob was like this [stands up, starts pacing around excitedly, waving his arms]. He walked out and he comes back and he goes, ‘I’m never giving you credit for that!'” Good times.

In his 67th year, Werner Herzog is finally getting credit for his baroque sense of humor, with the outright inanity of “Bad Lieutenant: Port of Call New Orleans” and the eerie oddities of “My Son, My Son, What Have Ye Done?” Still, I don’t know how anyone could not watch Herzog’s peroration against the “obscenity” of the jungle from Les Blank’s “Burden of Dreams” within grinning madly, if not laughing out loud. Herzog found the time recently to enlarge his notes on that same film, to translate his crabbed spider-scrawl to the narrative “Conquest of the Useless: Reflections from the Making of ‘Fitzcarraldo” (Ecco, $25). His dealings with Klaus Kinski are well known to aficionados, and Kinski’s own suppressed 1988 memoir, “All I Need Is Love,” on the shelf beside me, tells his side. “Herzog is a miserable, spiteful, envious, stingy, stinking, money-hungry, malicious, sadistic, insidious, backstabbing, blackmailing, cowardly person, and a liar through and through… Driven by a pathological addiction to cause a sensation, he himself provokes the most senseless difficulties and dangers and puts the safety and even the lives of others on the line—only so he can later say that he, Herzog, has mastered the seemingly impossible.” Herr Herzog, have you any hyperbole? “Kinski ranted and raved for two hours—It was ugly, sickening, in fact. As I always knew, the man has no resilience. He is like an overbred racehorse that can run exactly a mile and then collapses. Now it is as if the jockey has to carry the horse to the finish line.” Tell me you don’t hear that grave yet jocular Teutonic intonation with every syllable. There’s beauty, too. “I looked around, and there was the jungle, manifesting the same seething hatred, wrathful and steaming, while the river flowed by in majestic indifference and scornful condescension, ignoring everything: the plight of man, the burden of dreams, and the torment of time.”

Also of note: Wes Anderson’s almost-pocket-sized coffee-table book “The Making of ‘Fantastic Mr. Fox,'” (Rizzoli, $35) filled with the gimcracks of that pint-sized gem; Shawn Levy’s thorough, engaging biography, “Paul Newman: A Life,” (Harmony, $30) which I wrote about earlier this year, and “Life as We Show it: Writing on Film,” edited by Brian Pera, Masha Tupitsyn (City Lights, $18). A mix of essays that range from impenetrable erudition to gentle play, “Life” shows a range of ways to sink into movies. Lynne Tillman’s “Other Movies” snaps to with her crisp sensibility, her observational equipoise: you can’t fault a plank in the gleaming parquetry of her prose. Looking at life like a reflection of cinematic space: flashes of movies past in the teeming cockroach present, movie star illumination that shines on the grungy quotidian. Of the dozen or so standouts in the twenty-five selections, Claudia Rankine shows what prose does that the image doesn’t: passages describing moments that can fix, transfix, rather than yielding to the next, oncoming now. Like movies. Like life. Like writing.