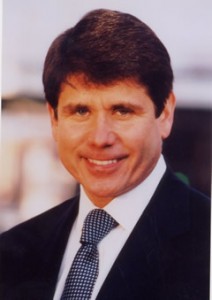 Rod Blagojevich knows a lot about Elvis.  “If only I knew that much about government, huh?”  The former Illinois governor, indicted last January for conspiring to sell Barack Obama’s vacated Senate seat and other transgressions, showcases his zeal for all things Elvis while defending the 1964 musical, “Viva Las Vegas.”

On a night just before Christmas, Blagojevich speaks at Columbia College’s Cinema Slapdown. Begun in 2006, the Slapdown consists of a free screening followed by intense debate between a faculty member and guest. The atmosphere at Columbia’s Film Row Cinema is often electrifying; audience members boo and cheer the debaters, who ricochet barbs off one another as they argue the merits of films like “Barbarella” and “Showgirls.”

Blagojevich goes toe to toe with Film & Video Professor Dan Rybicky, a man who softens no blows. “It’s hard for me to watch young, beautiful Elvis on screen without conjuring up later images of old, fat, drugged-out Elvis, popping pills and eating fried-peanut-butter-and-banana sandwiches before dying an early, fat death… ‘Viva Las Vegas’ isn’t meant to be truthful or resonant, but that might be the difference between you and me, Rod. You might be looking for an escape when you watch a movie… and who can blame you for that, right?”

Just a few hours earlier, Blagojevich attended a court date for his corruption trial, during which prosecutors announced they planned to re-indict the former governor early next year for defrauding voters. The irony is not lost on the Slapdown crowd, including Columbia student Bella Mia. “I’m sitting in the same room as somebody who might be going to jail!”

Slapdown moderator and co-founder Ron Falzone says, “We’re used to thinking of an authority figure as a hard person to argue with… . Whatever is going on in [Blagojevich’s] life is immaterial: he was still the governor twice, he’s still been a state senator, a congressman. But Dan is fearless. Dan goes right at him.”

Blagojevich defends “Viva Las Vegas” as a wholesome film about values, to which Rybicky says, “I don’t know if I should be taking value lessons from you right now.” However, Blagojevich is no glass jaw.  Audience member Gabe Klinger calls him “bulletproof.”

Blagojevich feels a kinship to Presley’s character.  “He’s gotta pick himself up, and scratch and claw. It kinda reminded me of my story. I was the governor… and now I’m doing this!”

Though most of the debate centers on the tragedy of Elvis’s legacy, some questions are as innocuous as the film they follow. One audience member asks Blagojevich, “How would you rate your hair against Elvis’?” (Blagojevich gives Elvis the edge.)

But who won the debate? Was it Rybicky, who decries “Viva Las Vegas” as the piece of “fluff” that broke Elvis Presley, or Blagojevich, who thinks movies should be a positive escape from the complexities of the real world?

“You just gotta watch it and enjoy it,” Blagojevich says. “It’s a nice story; the songs are good… and there is, in every Elvis movie I can think of—every one of them—a happy ending. I believe in happy endings.” The former governor’s next court date is set for January 27. (Laura Hawbaker)