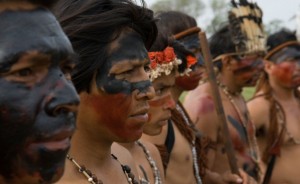 (La terra degli uomini rossi, 2008)  Chilean-Italian director Marcho Bechis’ modern-day drama “Birdwatchers” harks back to politically aware 1960s Brazilian cinema in its piercing slant on that country’s history of colonialism and exploitation of its indigenous peoples. The Guarani-Kaiowá have had their land taken by European colonists for generations; “Birdwatchers” opens with members of the tribe performing a version of their rituals on the river banks for passing tourist boats. The twist that comes almost immediately is delicious, while the rest of the drama’s points about globalization, dramatized by a standoff between the plantation owners of Mato Grosso do Sul and the Guarani, lack definition as parable. Still, “Birdwatchers” has an ending to match its beginning, a rare enough structural feat. 108m. 35mm. (Ray Pride)