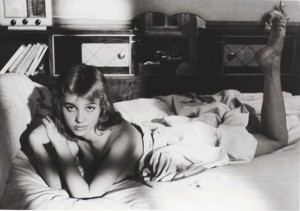 (Bob le flambeur, 1956) A steel-haired, middle-aged, world-weary gambler (Roger Duchesne) comes up with the grandest con of his day while cruising the nightspots and fleshpots of backstreet Montmartre, but his moment of deepest melancholy comes from a single gaze upon the bare back of a young girl he’s sheltered as she sleeps with his young protégé. “Bob the Gambler,” shot on location in 1954 in gambling dens that were soon to be demolished for housing developments is, among other things, a refined variation on John Huston’s “Asphalt Jungle.” The clutch of Elia Kazan films showing at Siskel in January is exciting, as well as the film sidebar to the MCA’s Italics exhibition, but equally so are the weekend matinees at the Music Box, highlighting the luminous, bittersweet glories of French film noir, as showcased and distributed by Rialto Films. Melville, an unapologetic admirer and collector of Americana and American crime movies, took much of his ethos from the gangsters and brooding tough guys in Hollywood pictures of the 1930s and 1940s. Melville and his characters were wont to mutter sour-sweet epigrams about trust and loyalty, like “If there are two of you, one will betray.” But that’s nothing until you hear this film’s ending. Nobody’s perfect; this curtain line is. (Neil Jordan’s unsuccessful remake, “The Good Thief,” starring Nick Nolte, was released in 2002.)  98m. (Ray Pride)

“Bob the Gambler” plays the Music Box Saturday and Sunday at 11:30am.