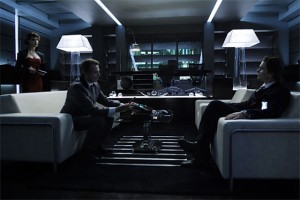 “Daybreakers,” written and directed by twin brothers Michael Spierig and Peter Spierig (makers of 2003’s outback zombie tale “Undead”), is set in 2019, when most of the world has “turned” after a plague, becoming vampires (or “vamps,” as the script has it) dependent on an ever-decreasing population of humans for blood to put in their morning coffee. Edward Dalton (Ethan Hawke) is a hematologist vamp researching a blood substitute for his boss Charles Bromley (Sam Neill), head of the Bromley Marks Corporation, “World Leader in Blood Pharmacy.” The yellow contacts Hawke wears are almost unnecessary, set against his impressively high, gaunt 40-year-old cheekbones. He carries a kind of survivor’s guilt, wishing he could be disinfected, to become human, mortal, again. The opposition is represented by a cross-bow wielding human with a secret named Elvis (Willem Dafoe): vampiric even when playing ordinary humanity, Dafoe’s cracker Van Helsing drawls the bulk of the movies’ punchlines (“Bein’ human in a world full of vampires is as safe as barebacking a five-dollar whore.”) While there are sleek Chrysler coupes retrofitted for “daytime driving” for vamps, most of the action takes place by night. The look is of the same fluorescent cast and grainy pallor of “Minority Report” with modest design elements suggestive of “Blade Runner.” Boxes within boxes appear as grids of surveillance screens and on carpets and curtains and similar paintings, distant relations of Mondrian’s “Broadway Boogie Woogie,” hang on boxy apartment walls, much as Frank Lloyd Wright’s Ennis House was used in Ridley Scott’s design. Other citations are equally unfussy: the cream-in-the-coffee-cup sneak zoom from Godard’s “Two or Three Things About Her,” cited in “Taxi Driver” and “Observe and Report” is seen here as java juiced with a swirl of red, human blood, used to indicate one character’s resistance to its power. The immortals also have a habit that repeatedly amuses, chain-smoking with abandon. But “Daybreakers”‘ vigor is elsewhere. The real business is spatter. Once the confrontations kick in under blue penumbral light, the detonations of the vanquished are satisfying, silly sanguinary excess: vamps concuss in a splendor of cherries jubilee and black granular muck. It’s crowd-pleasing B-movie fun throughout. There’s a neat shot near the end of the film rich with implication, as soldiers tumble over each other in slow motion, as if from George A. Romero’s “All Undead on the Western Front,” but it’s just one more burst of clever shorthand, even as it suggests possibilities for a sequel. The supposed American city and countryside are shot in Brisbane and Queensland, leavened by the smallest details, such as a single shot of a U. S. flag, to pleasingly unsettling effect. With Michael Dormand, Isabel Lucas, Claudia Karvan. 98m. Anamorphic widescreen. (Ray Pride)