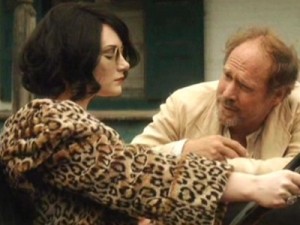 The Tennessee Williams archive is supposedly filled with uncatalogued manuscripts and revisions and rethinkings and retitlings of the same. Actress-turned-writer Jodie Markell makes a serviceable exercise in exhumation of the words of The Bird in “The Loss of a Teardrop Diamond,” written a half-century ago, and Bryce Dallas Howard, playing a rich young flapper in 1923 Memphis, makes the most of her large, blue, feline eyes amid the humidity. Still, she seems too contemporary, too strong, to embody a Williams belle named “Fisher Willow.” (It’s reported Lindsay Lohan had been set for the role originally; that would have been an entirely different kettle of melodrama.) With an inadequate Chris Evans as the requisite young hunk-perhaps-brute Fisher hopes to usher into society for the season as her escort, Mamie Gummer, Ann-Margret and Jessica Collins. For what it’s worth, Will Patton was born to play alcoholic fathers, but a twist and a splash from his directors are required. Ellen Burstyn’s peroration as an opium addict who wishes to die is ripe, but hardly in the league of her role in “Requiem for a Dream.” The mind wanders, drifting to daydreams of the recent New York production of “A Streetcar Named Desire,” starring Cate Blanchett under the direction of Liv Ullmann. 102m. (Ray Pride)