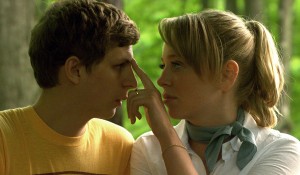 Straight teen male virginity is the crise du coeur for Nick Twisp, as played by Michael Cera (“Paper Heart,” “Nick and Norah’s Infinite Playlist”). This fawn-like mumbler can endear as a supporting character, but cannot sustain a star turn in his first try. Twisp is the horny Californian invented by C.D. Payne for a book series that started in 1993 with “Youth In Revolt: The Journals of Nick Twisp.” Screenwriter Gustin Nash (“Charlie Bartlett”) adapts Payne’s material, and Miguel Arteta (“The Good Girl,” “Chuck and Buck”) directs this knowing, charm-impaired, low-key comedy in Michigan, where he fills in as “Illegal Immigrant #2.” Nick has two significant others. There’s his evil alter ego and id-enabler Francois (Cera with a slight mustache and gauche wardrobe) who goads him into juvenile delinquency. Nick’s acting out gets him into the bed of Sheeni Saunders (Portia Doubleday, with such a movie-ready name). Residing at Restless Axles Trailer Park, she has bigger crushes on her poster of Jean-Paul Belmondo and on blond poet and classmate Trent (Jonathan B. Wright). “In the movies, the good guy gets the girl,” notes Cera in a script flaunting more cineaste quips than craft. For just one of the inane twists in Twisp’s saga, Sheeni’s ultra-strict parents get dosed with psycilocybin mushrooms at Thanksgiving. Buzz about some cute echo of “Fight Club” is off-point. With Jean Smart, Mary Kay Place, M. Emmet Walsh, Vijay Joshi, Zach Galifianakis, Fred Willard, Ray Liotta, Justin Long, Steve Buscemi. 90m. (Bill Stamets)