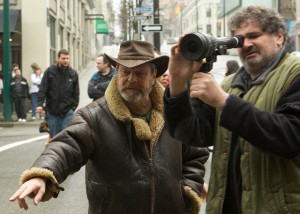 A compact magic circus pulls to the corner, a horse-drawn wagon bursting with cutout scenery and backdrops, a cutaway forest in illusionist’s space, framed by swaddling hushes of drapery as much dust as velvet, as well as naked clear light bulbs, that could have rolled up in earliest Panto days, an “Imaginarium” that is the bailiwick of one Dr. Parnassus.

In modern-day London, Parnussus, Christopher Plummer in dotty autumnal bluster, more leer than Lear, is an old man. This old man is older than old, older than dirt, old as Mr. Nick (the Devil, a husk rasped full by Tom Waits) with unsettled wagers between immortality and youth. Valentina, his daughter, is about to turn 16. Valentina. The so-tall Lily Cole, a model making her acting debut, has a round face that’s pre-Raphaelite apparition by way of painter John Currin’s cheeky fantastication of the rubicund, childlike female face, as round and pretty as the moon, almost as if made for Terry Gilliam to set in his pageant of tatterdemalion.

Gilliam’s latest film (written with Charles McKeown, “Brazil,” “Baron Munchausen”) nearly collapsed, as several of his projects have. In this case, it was the sudden death of Heath Ledger with the film half-finished. Ledger’s character first appears as a figure from Tarot, a striating shadow figure against the bulwarks of a long modern bridge in the deep of night, The Hanged Man.

Tony is a Trickster, a fancy-pants and escapee from the higher reaches of society (as well an actor with only weeks to live). Gilliam’s solution to his missing leading man was simple and works unexpectedly well: all of the unfinished scenes took place behind the mirror of Dr. Parnassus’ Imaginarium, so he divided the three scenes between Ledger’s colleagues, Johnny Depp, Jude Law and Colin Farrell. Each actor wears their own fitting of the costume that Ledger wore, with a carat-inverted carat goatee, mascara and lank oily hair pulled back in a thin, prideful queue. Waits’ Mr. Nick is also an armor of caricatured strokes, louche in a bowler and a John Waters-stripe-‘stache.

Without the charisma of the actor(s), Tony would be a sorry sight, a shabby self-delusion. Attractively, as in another feature film in current release where his supporting role is unbilled, Farrell performs with unpretentious dash. He’s the least tony of Tonys.

Law’s brief segment is set in the most Gilliamesque of imaginary worlds, on a ladder that reaches the clouds in the sky, which, when its slats are sawn, becomes a set of stilts that plunge forward and advance across the landscape at great height, epic against blue sky and mad tufts of white cloud. Other visual elements lurch in the rash direction of John Boorman’s immortal mess, “Zardoz.” And as always, being on-the-nose seems to be one of the joys Gilliam takes in screenwriting. A club with multiple threats is called Medusa, an unlucky pub, The Horseshoe. “Don’t believe what you read in the papers—especially the Mirror.” (Rimshot.) One of the travels behind the mirror considers the “immortality” of Valentino, James Dean, Princess Di. There’s no reach for nuance, only essence, when Depp’s Tony observes, speaking words the late Ledger would have, “Nothing’s permanent, not even death.”

But what truly goes on behind the mirror in the good Doctor’s mind is what is surely on Gilliam’s: the nature of storytelling, the vulnerabilities of advanced age, the notion of legacy. Parnassus is fixed on “The story that must be told forever to sustain the universe… You can’t stop stories being told.” Dear, dear Dr. Parnassus, dear, dear Mr. Gilliam: You’re telling your own story, aren’t you? (Check the sage beard on the 67-year-old Gilliam’s mug: he’s invested in the role.) There is also the elder man’s melancholic plaint, of how he met Valentina’s much younger mother: “I was a thousand years old, how could I woo her?”

Verne Troyer is underfoot as Percy, Parnassus’ mandarin, impatient helper. If Gilliam were God and Gilliam had made the world, on the fifth day, he would have said, “Let there be midgets! Many, many midgets! Where are my midgets? Where are they? Running between my legs to-and-fro?” Then Gilliam would have pitched his high, antic giggle and all would be right in His World. Everything that would be small to other imaginations is writ large in Dr. Gilliam’s.

The opening credits include Gilliam’s take-the-piss company name, “Poo Poo Pictures Productions Ltd,,” but the film’s ending, its very, very final post-credits ending, is something else altogether, a gift, not a jape. And I’m not talking about the card, “A Film From Heath Ledger & Friends.” No, it’s after that. Catch your breath, rest your eyes, linger through the credits. At the true, truest final seconds you will hear a sound, a sound drawn that repeats in the fabric of the movie, and a sudden welter of suggestive meanings will crash in your ears on so many levels I dare you not to have a short, sharp intake of breath and tear up just a little just as I am while remembering and typing this. It’s my favorite split-second of cinema from 2009.

“The Imaginarium of Dr. Parnassus” opens Friday at theaters including Music Box, River East and Pipers.