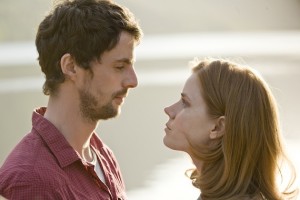 Amy Adams was savorable in the likeable “Julie & Julia.” She’s almost insufferable in “Leap Year.” This awful romantic comedy is scripted by Harry Elfont and Deborah Kaplan, who also take credit for “Made of Honor” and “Surviving Christmas.” Anna (Adams) makes a living in Boston “staging apartments.” Clients pay her to bait prospective buyers with irresistible temporary furnishings that include the smell of chocolate-chip cookies baking in the kitchen oven. After four years together she notices her cardiologist boyfriend Jeremy (Adam Scott) has yet to ask for her hand and place a ring on her finger. Off he goes to Dublin for a medical convention. She hears there’s a tradition of women proposing to men in Ireland on leap year, so she decides to surprise him there. Travel troubles plop her in an Irish village where further troubles link her with pub proprietor Declan (Matthew Goode) as her traveling companion to Dublin. Fret over their initial mutual hostility. Pray they get where their hearts lead by February 29th. The plot introduces two couples faking matrimony for ulterior motives: both will lead to the real thing. Aww. Anand Tucker lackadaisically directs this incompetent chick flick with no trace of his far better work on the upcoming “Red Riding: 1983,” as well as “Shopgirl” and “Hilary and Jacky.” The recurring schtick of tipsy coots spouting blarney is an affront to some sort of Irish Cultural Heritage Board or Emerald Isle Anti-Defamation Front. With Noel O’Donovan, Tony Roh, Pat Laffan and John Lithgow for only about a minute and a half, thank your lucky charms. 97m. (Bill Stamets)