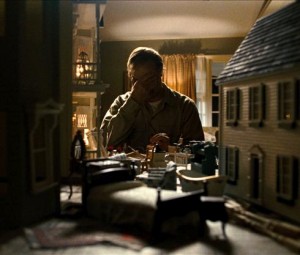 There’s the “Lord of the Rings” trilogy, there’s “King Kong,” and now there’s Peter Jackson’s adaptation of Alice Sebold’s unlikely bestseller, “The Lovely Bones,” written with his usual collaborators Fran Walsh and Philippa Boyens. “The Lovely Bones” is narrated from beyond the grave by a young girl, Susie Salmon (Saoirse Ronan), as she watches over her parents (Rachel Weisz, Marc Wahlberg) and her rapist-murderer (Stanley Tucci), trying to make sense of what’s happened to her so she can move beyond the strange limbo she’s in. This is where the overbearing part comes in: in concept, her surroundings are limited to the experience and emotions of a girl her age, but the riot of stylized color and bold backdrops is less evocative of pictorial masters of subjective delirium like Powell and Pressburger (“Black Narcissus,” “The Red Shoes”) than of IMAX-sized screensavers. Fields and skies that resemble ads for over-the-counter antihistamines do the tale no favor, either.

But after its Oscar-qualifying run, Paramount and DreamWorks made a bold marketing choice, pulling the film’s Christmas release and rescheduling for mid-January. Jackson has so superlatively realized the emotional surges of an immature, inexperienced girl that it’s now being positioned as a film for an audience that sees and re-sees the “Twilight” movies. It’ll be fascinating to see how that plays out, even if some older viewers wonder where the bold yet delicate director of “Heavenly Creatures” went. That movie’s depiction of prehensile sexual and emotional stirrings between its female characters is epic in its compact concentration compared to “Lovely Bones.” Another choice by Jackson, to leave the novel’s version of Susie’s rape and murder off-screen, seems extremely well judged in retrospect. It could work as “Silence of the Lambs” for young girls, missing only choruses of ponies and unicorns to suit its freshly anointed demographic.

Ronan, who was the cold, vengeful heart of “Atonement,” her pale blue eyes flint for fire, is terrific within the folds of production design, while Wahlberg and Weisz make little impression. Stanley Tucci is impressive as the creep neighbor who kills, banal and frightening enough to give the actor himself nightmares. The thinning blond hairpiece, aviator glasses and other bits of dress make him look enough like a man on the 50 or 151 bus you’d either not notice or take precaution not to sit beside, depending on your mood. As for Susie, he “gives me the skeevies.” “My murderer was a man from my neighborhood” is a line that ought to chill, but it takes Ronan’s eyes, not her inflections, to bring the pain to life. Susan Sarandon’s bravura nuttiness as drinking, chain-smoking Grandma Lynn belongs to another movie, perhaps something after the style of John Cassavetes peopled by meth-addled drag queens.

While the lovely music is advertised as a new score by Brian Eno, it’s at its most aggravating when it recycles older themes, from albums that would be familiar to any of Eno’s listeners, but less so the characters in the story or the now-targeted ‘tween audience, and more likely Jackson’s own 48-year-old ears. Oddly enough, the foraging and pillaging of Michael Nyman’s back catalog for the soundtrack of “Man on Wire,” music equally familiar to me, didn’t cause this kind of aggravation, although there was one critic who wrote that he had to walk out of that amazing film after twenty minutes because of its familiarity. Still, I can imagine Eno was great music to listen to while editing yet one more interminable draft of “The Lord of the Rings” screenplay. But it’s one more little thread of exasperation in a wildly overproduced film. Scottish director Lynn Ramsay developed a version of “The Lovely Bones,” and considering her skills with sound and music, as in “Morvern Callar,” you have to wonder what sonic landscape Susie would have lived and thrived in if that version had come to pass.

“I remember being really small” is a line in Ronan’s voiceover as the raped, murdered girl that evokes grim laughter in recollection. Susie wanted to be a “wildlife photographer,” she says, and Jackson shows her with a slim wand of a 126 camera with flashcubes, a flash and a flash sound going off even when there’s no flash. She’s grown up to be a production designer with a $65 million budget instead. Jackson’s Kiwi take on the U.S. in the 1970s is more Pennsyl-tucky than sociologically apt. The director of movies like “Brain Dead” does pop up now and again, such as in a mall bookstore stacks copies of Germaine Greer’s “Feminine Mystique” near posters for the novel, “The Lord of the Rings.” Ka-ching.