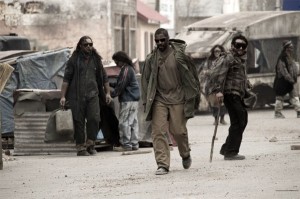 In post-apocalyptic films, survivors are gleaners who improvise their wardrobes and weapons from pre-apocalyptic debris. In “The Book Of Eli,” screenwriter Gary Whitta likewise proves resourceful in recycling a gamut of bits from prior films for a robust genre exercise directed by Allen Hughes and Albert Hughes, the twins who brought us “From Hell,” “American Pimp,” “Dead Presidents” and “Menace II Society.” Eli (Denzel Washington, “American Gangster,” “The Siege”) is a loner armed with a long blade and keen senses of hearing and smell. Trekking westward for three decades across a despoiled landscape after “the war” and “the flash,” he clutches a weighty leather-bound tome locked with a clasp. “The Book of Eli” is a literal Western for its itinerary, but includes a frontier town run by  Carnegie (Gary Oldman), a sort of an American pimp from hell menacing society where the president is dead. Ensconced in his office above a saloon called The Orpheum, he’s introduced with a copy of R. J. B. Bosworth’s biography “Mussolini” prominently in view. Carnegie, maybe named for the patron of public libraries, dispatches illiterate bikers to find a copy of one special book he covets. The latest foray only yielded “The Da Vinci Code” and a well-preserved issue of Oprah’s O magazine. Knowing the location of freshwater springs gives him dominion over the thirsty townfolk and his thugs. Finding a King James Bible, though, will let him expand his power. “I grew up with it,” he tells Eli, who is passing through town to recharge the battery for his iPod. “I know its power. So do you. That’s why they burned them after the war.” This is Whitta’s most inspired idea: two men fighting over a text that can reboot America, though with opposed agendas. “It’s not a fucking book–it’s a weapon,” thunders Carnegie. Eli finds allies in Carnegie’s blind common-law wife Claudia (Jennifer Beals) and her sighted daughter Solara (Mila Kunis), perhaps named after a rusting Toyota. “The Book of Eli” is a far more fun than the “The Road.” References include the rowboat in “Children of Men,” the bibliophilia of “Fahrenheit 451” and the attuned dexterity of “Zatoichi.” The biggest debt is owed to “The Postman” (1997) wherein an itinerant bard starts to restore a post-apocalyptic America by reciting Shakespeare. Eli is a former K-Mart clerk with voices in his head and burns all over his back who undertakes a similiar mission. Why it takes this holy wanderer thirty years to reach a city upon a hill is the least of this action film’s revelations. The best that can be said about the outsized score is that Atticus Ross composes in the key of self-parody. With Ray Stevenson, Tom Waits, Michael Gambon and Frances de la Tour. 118m. (Bill Stamets)