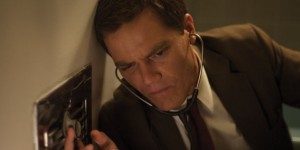 Noah Buschel’s “The Missing Person” was well-regarded in its 2008 Sundance premiere, but makes it to theaters only now. (Elements involving the Twin Towers may be part of the reason for the modest, delayed release.) A knottily plotted detective yarn, more film blanc than noir, it features Chicago’s own Michael Shannon as a 1940s-style detective whose unintentional specialty is finding psychological damage all around him. The twenty-first century needs definition, if not detection, and Buschel’s work is a peck of poetic longeurs and narrative crisscross. The pacing is eccentric yet foreboding, suiting the elegant unease of Shannon’s performance. He’s difficult, his character is unlikable, but you can’t tear yourself away from the simmering mood, the glowing performance. From “Bug” to “Revolutionary Road” to “My Son, My Son, What Have Ye Done?” Shannon populates a world all his own, but manages to bring the movies he’s in along, revealing something about our own as well. With Amy Ryan, Frank Wood, Linda Emond, Paul Sparks, Margaret Colin, John Ventimiglia, Yul Vazquez, Merritt Wever, Daniel Franzese. 95m. (Ray Pride)