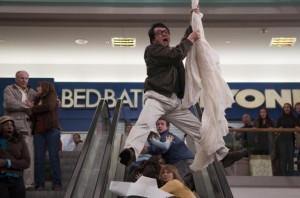 On loan to the CIA from the Chinese intelligence service, spy Bob Ho (Jackie Chan) courts suburban neighbor, abstract painter and single mom Gillian (Amber Valletta, “Gamer”) in this rote kids adventure. Brian Levant directs a formulaic screenplay by Jonathan Bernstein, James Greer and Gregory that’s a lot like the one Levant directed in “Are We There Yet?” (2005). Once again kids conspire to sabotage a prospective step-daddy. Gillian flies to Denver when her dad gets hip-replacement surgery, so Bob babysits 14-year-old Farren (Madeline Carroll, the super-competent little girl in “Swing Vote”), her younger brother Ian (Will Shadley) who’s super-impressed that Bob saw David Bowie and Iggy Pop rock Shanghai in 1985, and little Nora (Alina Foley) who chases her squealing pet pig all around the house. An evil Russian invents bacteria to eat all the oil in the world except Russia’s, so Bob and the kids get a chance to bond while aiming trick bikes into the groins of goons. George Lopez plays Bob’s boss and Billy Ray Cyrus plays his sidekick spouting inscrutable countryisms. The press kit is more entertaining than the film: “We were trying to make a 400 million dollar movie for a lot less,” says Levant, accounting for his titanic shortfall. One actor was once an Icelandic aerobics champ, and another, hailing from Oklahoma, aspired to be “a sociologist and work in the social scope” (sic) but instead “organized a charity called Supermodels Stepping Out Against Hunger.” Chan fans hoping for his usual limber martial arts humor and garbled English outtakes ought to look elsewhere. Will Shadley, Alina Foley, Magnus Scheving and Katherine Boecher. 92m. (Bill Stamets)