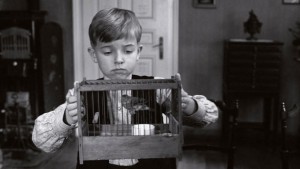 (Das weisse Band: Eine deutsche Kindergeschichte, 2009) One of the cool ironies of Michael Haneke’s masterful “The White Ribbon,” an enigmatic parable set in the fading days of the Austro-Hungarian empire at the dawn of National Socialism, is that nothing is in black-and-white, and yet everything is, swaddled in an immaculate monochrome palette by cinematographer Christian Berger. Berger shot “Caché,” among other films, for the writer-director, but their work here, drawing notably upon the then-contemporary photographs of the great August Sander, is superlative. The film was shot in color, then tweaked digitally, to great effect, creating a silky dream of foreboding and fear. In a small village, crimes are committed. Children and punishment are the recurring elements: the story’s power comes from the unexpected. The children believe. They’re idealists. “The right hand of God,” Haneke’s called them in interviews. Idealists who follow the letter of their understanding of the law. All is calm. World War I approaches. It seems inevitable. Jean-Claude Carrière, who’s collaborated with Luis Buñuel and Milos Forman, helped Haneke pare his script, once intended a decade ago as a television project, to the fearsome fable it is now. With Ulrich Tukur, Susanne Lothar, Burghart Klaussner, Marisa Growaldt, Josef Bierbichler, Janina Fautz, Christian Friedel, Steffi Kühnert. 144m. (Ray Pride)