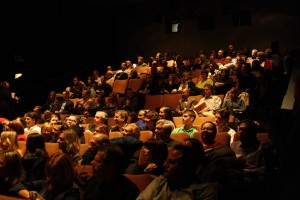 The rumpled red carpet at the State Street entrance of the Siskel Film Center has a bright yellow sign right beside it early Friday evening: FALLING ICE.

In the lobby upstairs, James Allen Smith is nervous. The lobby stirs and buzzes. Smith’s feature documentary, “Floored,” is about to have its first Chicago showing. Three shows on two screens that follow an open-bar reception are sold out. Most filmmakers are nervous before a debut, but this is also a crowd comprised largely of its subjects, floor traders from the CME. They’re potentially its most fervent, eager audience as well. Smith, smiling, realizes he’s clutching an extra copy of the film in its gray plastic box. Greetings are cheery, masculine and plentiful.

There are women in mostly separate scrums—here’s a fur, a Chanel clutch, “Yes, I remember, we met on the street in Glencoe”—but it’s the men who swan and peacock. There’s some Brooks Brothers with intermittent bowties. A young trader who’s featured loiters in a designer plaid porkpie atop a thick, distressed leather coat. A man juggles two iPhones and a silver card case like a cigarette case. Trader Joseph Gibbons, a producer of the film, wears a bold purple tie below large horn rims and shaved head, twirling a black cigar almost a foot long, the most expensive Tootsie Roll in the Loop. 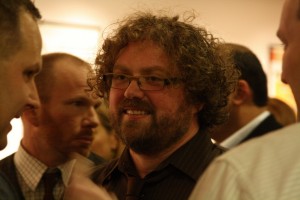 Testosterone never sleeps. There is no casual under-dressing. Another trader, glimpsed in the film repeatedly in the pits, has skin the brown of a burnished nut and falling corkscrews of white-gray locks, with driving loafers of buttery brown leather. Voices betray the trade, seasoned with grit and rasp.

Once the lights go down, there’s a knowing murmur as lore and legerdemain unfolds. The movie’s melancholy seeps in, surprising the audience. The louder-than-life figures give way to a story about the demise and demolishment of a Chicago, generational, blue collar, money-spinning industry. The pits were a way up for generations of the Chicago working class. There’s no open outcry, discounting a single barked “Bullshit!” when someone defends the computerized trading that has winnowed the population of the pits to ten percent of what it once was. “A baschun of capitalism,” a subject calls it. “There are cliques, Jewish, Irish, Italian cliques. I’m Polish. I don’t think we have a clique.” Another: “We lose open outcry, we’ve lost an institution!” During the Q&A afterwards, there’s a simple statement: “This film was screaming at me, this is a Chicago story.”

“This is going to let me show my children what we lost,” another subject says, settling back into the dim of the theater. (Ray Pride)