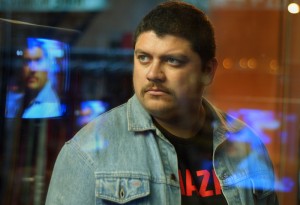 Another stalker story, no, not about you or your neighbor, or a Hollywood meet-rude, but a small, scruffy minimalist comedy from Uruguay, which also won in the 2009 Chicago International Film Festival’s New Director’s competition. In writer-director Adrián Biniez’s debut feature, he follows Jara (Horacio Camandule), a shy, portly supermarket security guard who works overnight in a Montevideo suburb as he discovers dorky 25-year-old cleaning woman Julia (Leonor Svarcas) and begins to spy on her and then follow her. While classical Hollywood comedies often deal with similar plot devices, in front of a bank of monitors, there’s an instant queasiness. Yet Biniez is astute enough to realize the story he’s telling in his deadpan comedy; as he puts it, “This film is not about the beginning of a relationship, but about what precedes it. A stage where what he knows about her is little more than an image: a big question mark he wishes to decipher.” Camandule’s portrayal of sheer boredom is memorable, too. Biniez acted with Svarcas in “Whiskey” (2004). 84m. (Ray Pride)