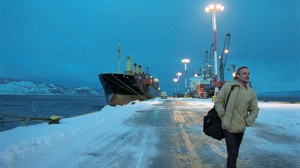 A study in cinematic storytelling through gentle and persistent observation, young filmmaker Lisandro Alonso’s fourth feature, “Liverpool,” is easily his best to date, pungent in its minimalist choices of long takes and striking color patterns, yet avoiding some of the more jarring elements of his exploration of less-populated reaches of his native Argentina in his earlier “La libertad” (2001) and “Los muertos” (2004), as well as the goof on rural-vs.-urban culture clash of characters from his first two features in “Fantomas” (2006). (Blood and shit were involved.) In “Liverpool,” a lonely merchant sailor, Farrel (Juan Fernandez), wanders to the end of the world to the Tierra del Fuego hamlet where he grew up, on the tip of the country, at the farthest reaches of the continent of South America, in the shadow of the frigid Martial Mountains. There’s beauty in the landscapes and interiors Farrel moves through, and the journey is hypnotic, with several startling, wondrous moments to behold. Which are memories Farrel might take back? What are the touchstones a viewer is meant to savor? “Liverpool” continues to play in the mind afterward. It’s a living, breathing ghost story.  84m. (Ray Pride)