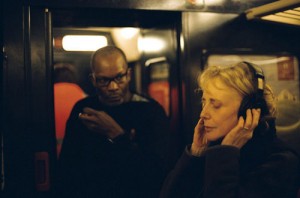 Wrathful winter rain fell on Hollywood as James Cameron won Golden Globes for the number two highest-grossing film of all time worldwide, “Avatar,” and he once more rolled out his public persona as King Of The World Of Self-Infatuated Windbags. (His speech surely shared the same writer as the one credited for dialogue in “Avatar.”) His key competition was another tall director, a woman named Kathryn Bigelow, whose formal control in “The Hurt Locker” approaches both mathematics and poetry while functioning as action film and critique of the action film, as embrace of masculine manias while suggesting they are both mysterious and eternal. The two were once married: Bigelow captures one central figure’s physicality, all swagger and smirk, and Cameron creates another of his mixed-message “chick flicks,” an eco-fable part “Aliens,” part “My Little Blue Flying Pony.” Where’s the gender divide there?

In the advance toward the Oscars on March 7, there’ll be even more journalistic comparison-and-contrast. The binary aggravations will intensify, neglecting to embrace the humanity of filmmaking, of faces and fears and hopes. I found myself reaching for B. Ruby Rich’s essential “Chick Flicks: Theories and Memories of the Feminist Film Movement,” but what I found on the epigraph page was all I needed, a quotation from French cine-essayist Chris Marker: “Who remembers all that? History throws its empty bottles out the window.”

With “35 Shots of Rum” (35 Rhums), French filmmaker Claire Denis throws a lot of things out the window, including her own fascination with the weaknesses of men and women, to embrace a story about happiness, about community and small joys. There are traits you can identify in a director’s style and themes. But are they quintessentially matters of gender or simply of temperament?

I defy another woman or a man to make films that are so filled with breath as those of Denis, whether her French Foreign Legion demi-musical, “Beau Travail” or her daring memory fugue, “L’intrus”, or even “35 Shots Of Rum,” a film about love, this glowing, intimate story of family connections and of the dance of personality between neighbors and co-workers. She sees the world. She gets it down. Her world. A woman. Art.  Bigelow’s own “Near Dark” evokes the dance of doomed romance in Nick Ray’s movies: it wouldn’t be so hard to forge an entertaining argument that Ray was more “feminine” as a filmmaker than Bigelow.

In “Rums,” Lionel (Alex Descas) is a metro train driver, living in an apartment complex in Paris’ near suburbs with his daughter Josephine (Nicole Dogué), a college student. Josephine is drawn to Noé (Denis regular Grégoire Colin), a neighbor, and Lionel finds himself in a dance, figurative and literal, with another neighbor, Gabrielle, who takes an almost motherly interest in Gabrielle’s well-being. Meals are taken. Rain falls. Taxis stall. Drinks are drunk in a late-night café that stays open for the stranded crew. Dance develops. Later, steam rises from a rice cooker. It’s gently observed quotidian, captured with Olympian grace. And, notably, Denis’ film evokes the seemingly placid and ritualistic yet emotionally riven family dramas of Yasujiro Ozu (“Tokyo Story”), and a story drawn from her own experiences but also inspired by Hou Hsiao-hsien’s own Ozu homage set in Taipei and honoring that filmmaker’s centenary, “Café Lumière.” A female filmmaker drawing avidly from her male forebears. Across thirteen features, Denis’ subject matter shows an admirable, uncommonly restless sensibility, ranging from cannibals to cockfighting to the dreaminess of a traffic jam that prompts a one-night stand in “Friday Night.” Nothing happens, some might say, but they would be wrong: everything happens. Even more so in “35 Shots of Rum,” a dance of repetition and proximity, of intimacy and the unspoken, of lingering half-smiles and the graze of a hand against a shoulder. The very title is a dance around the idea, coming up twice in the movie but never explained. Between the characters, it’s an old, shared anecdote that only requires invocation, not explanation.

What is that? That’s cinema, to drop that word that’s lighter than air and heavier than bricks. In Wim Wenders’ “The State of Things” (1982), the doomed Francis Coppola-like producer, Gordon (Alan Garfield) tells German director Friedrich (Patrick Bachau), “The same old story, I keep telling you. Without a story you’re dead. You can’t build a movie without a story. Have you ever tried building a house without walls? It’s the same. You can’t build a house without walls. A movie’s got to have walls, Friedrich.”

“Why walls?” replies Friedrich. “The space between the characters can carry the load.” Moment to moment, as “35 Rums” moves fleetly forward, like Lionel’s trains, steady on the track up ahead, the heart fills, accelerates, never certain of the destination but gratified nonetheless. Happiness is hard. “35 Rums” is good. No, “35 Rums” is great. It burns, it intoxicates.