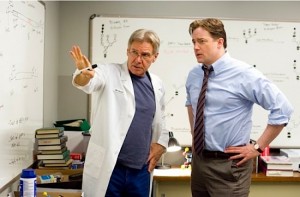 Dying children and their devoted parents sound like a pre-existing condition for a medical weepie. Titrate with an antisocial Nebraska scientist, Chicago venture capitalists and a Seattle pharma-corporation, and the prognosis is teary. Director Tom Vaughan (“Starter For 10”) upsets those expectations. “We absolutely had to avoid a sort of tugging-at-your-heartstrings tearjerker,” Vaughan told Film Journal International. Robert Nelson Jacobs’ screenplay is based on Geeta Anand’s 2006 book “The Cure: How a Father Raised $100 Million and Bucked the Medical Establishment in a Quest to Save his Children,” based on her two earlier articles for the Wall Street Journal. John Crowley (Brendan Fraser) finds a researcher and the funds to sustain, not cure his little Megan (Meredith Droeger) and Patrick (Diego Velazquez). They both face death by age 9 from Pompe disease. This chronic genetic degenerative neuromuscular condition costs the family $40,000 per month for nurses and medical bills, yet Crowley quits his job and sacrifices his health insurance to back ornery Dr. Robert Stonehill (Harrison Ford), whose lab blasts the Grateful Dead, The Band, The James Gang and Deep Purple. None of the characters are especially well-drawn, but they do articulate textbook issues of theory, money and humanity. Besides lines about “proof of concept” and “bring-to-market,” there’s some real-sounding biochem dialogue about lysosomes and phosphorylases. Not since “The Informant” have I heard so much biotech talk. “We need to see the science,” insist the investors with doctorates. “Make us believe.” The real Crowley consults, drawing on his experiences at Bristol-Myers Squibb, Neose Technologies, Novazyme Pharmaceuticals, Genzyme Therapeutics, Orexigen Therapeutics and Amicus Therapeutics. “Extraordinary Measures” might benefit from more, not less plot about “lactating bovine udders.” Left out are the scientists who milked rabbits and autopsied flightless Japanese quail. The clinical trials and the patent deals get more focus than the sick kids. Only one gun gets drawn in this pharma-thriller. To paraphrase an old rule of screenwriting, if in the first reel you introduce an enzyme anomaly that elevates glycogen levels in muscle tissue, well then, you sure better do you-know-what about it by the last reel. For a happy ending, a treatment that in fact yielded only a faint smile in a patient after fourteen weeks of infusions, triggers laugh-out-loud indications of healing in under two minutes of screen time. With Keri Russell, Sam M. Hall, Jared Harris, Patrick Bauchau and Courtney B. Vance. 105m. (Bill Stamets)