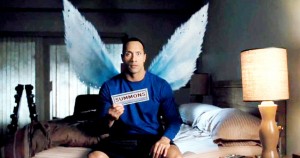 Yet another single man dating a single mom tries to impress her kids. As formula dictates, he endangers the youngsters, gets banished, and then repairs the damage so a happy new family can ensue. Dwayne Johnson (“Race to Witch Mountain”) plays Derek, a hockey player who’s courting Carly (Ashley Judd). He’s scored no points on the ice the past nine years, but brags of his minor-league record in piling up penalty minutes. This ex-pro sports the nonsenical moniker “The Tooth Fairy” for knocking out the teeth of opponents, although he never places money under their pillows. As Carly’s unimpressed son (Chase Ellison) points out: “you’ve got some inconsistent mythology.” Under his own pillow he finds a summons from the Dept. of Dissemination of Disbelief. His crime is telling an 8-year-old fan he should not dream of a pro hockey career, and almost telling Carly’s daughter (Destiny Whitlock) there’s no tooth fairy. In a blink he’s spirited to the Tooth Fairy Kingdom. Sentenced to community service, he returns to earth as a tooth fairy on call. His errands are stupidly directed by Michael Lembeck from a screenplay blamed on Lowell Ganz, Babaloo Mandel, Joshua Sternin, Jeffrey Ventimilia, Randi Mayem Singer and Jim Piddock. Fantasy is functional, claims “The Tooth Fairy,” with a conflict of interest as blatant as its product placement. Derek and other demystifiers are faulted for cutbacks in the kingdom since kids no longer believe in unicorns and the like. (Lembeck also directed “The Santa Clause 2” where Mother Nature, Father Time, Easter Bunny and Tooth Fairy belong to a consortium led by Santa.) The “as if” motif owes nothing to Hans Vaihinger’s “The Philosophy of As If,” but the heaven in “A Matter of Life and Death” by Michael Powell and Emeric Pressburger no doubt inspires the monochrome uniforms, neckties and hair-dos of the female bureaucrats running fairy headquarters. Here Julie Andrews plays the counterpart of that 1946 film’s Chief Recorder, and another Brit, Stephen Merchant, plays Derek’s caseworker, much like the earlier Conductor 71. A hockey crowd in East Lansing, Michigan gets a dose of Amnesia Dust. Not to dash your hopes, but you will not be so lucky. With Ryan Sheckler, Seth MacFarlane and an uncredited Billy Crystal. 101min. (Bill Stamets)