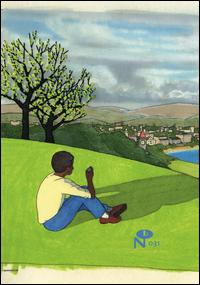 The Numero Group, primarily known as a record label, is venturing into new media with “Celestial Navigations,” a compilation of the work of Long Island filmmaker Al Jarnow, who’s created everything from children’s animation on shows like “Sesame Street” in the 1970s to trippy, experimental short films. “He has a really fascinating body of work,” says Numero Group’s Ken Shipley. “When we looked at it, we were like, ‘How can we piece this together the same way we piece a record together?'” Shipley says that the difficulty of putting together a film like this is comparable to the difficulties they face when putting together one of their comp records. “The life of a project tends to be about somebody being passionate about that discovery and driving it to the next place,” he says. “We have so many projects on our white board, there’s probably not enough time to complete them all in the lifetime of the label. A project is driven forward because someone becomes passionate about it.” Asked why exactly Numero Group decided to venture into film, Shipley shrugs, “For us it’s just, ‘Let’s make some cool shit.'” “Celestial Navigations” plays at the Siskel Film Center February 19-20. More info and footage from the film can be found here. (Tom Lynch)