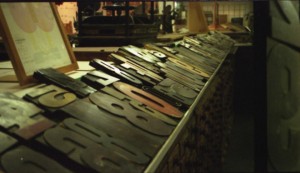 One of the more intriguing developments in the “democratization” of filmmaking with inexpensive video equipment and modest budgets is the development of an unexpected new form of star system. Specialized videos on motorcycles, guns and fishing have been bubbling under for more than a decade, sold and traded among the aficionados of the most specialized objects imaginable. (I’d never heard of most of the fish in a raft of successful fishing videos made around the world by an uncle of mine in the nineties.) With “Helvetica” and “Objectified,” Gary Hustwit’s made a fine line in successful self-distribution to designers worldwide, capturing process, but also the faces behind the work that inspire this small yet substantial potential audience. (“Floored,” which premiered at Siskel this month, may find similar trade among present and former members of the financial industry around the planet.) Just like they say in the magazines, the stars? They’re just like you and me. “It becomes obsolete, which is what makes it valuable,” someone observes under the opening titles of “Typeface,” capturing the enterprise both of the Hamilton Wood Type and Printing Museum in Two Rivers, Wisconsin, as well as Justine Nagan’s documentary, a Kartemquin Films production.  Nagan’s “Typeface” has a tactile character that’s unexpected. It’s awe-inspiring enough to see racks and racks and racks of beautiful, aged, oiled, dated wood type, but Nagan observes; the museum’s director flicks on circuit breakers as the day begins: thwock-thwock-thwock. It’s a fine example of how the past isn’t past. Best, it doesn’t feel nostalgic, but appreciative of history, its weight and its wonder. “It’s wood. How can you not like wood, right?” 58m. DigiBeta. Shown with Kartemquin’s short about the Chicago Chicano mural movement of the 1970s, “Viva La Causa.” 16mm. (Ray Pride)