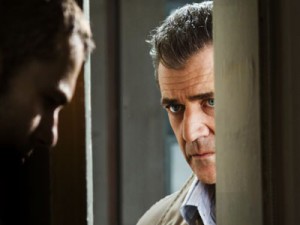 Bereaved and aggrieved, Mel Gibson plays a hallucinating loner meting out Old Testament justice. Armed with a gun, a badge and a bottle of thallium-laced milk, Boston detective Thomas Craven (Gibson) tracks the killer of his 24-year-old daughter Emma (Bojana Novakovic, “Drag Me to Hell”)–and the military contractor and the war-veteran senator who pay her killer and others to cover their tracks. “Welcome to hell,” are Craven’s last words to an evildoer. This mediocre action thriller opens at night with three bodies surfacing on a Massachusetts river. Cut to a 1990 home video of little Emma playing on a beach with a toy shovel. “Let me know if you strike oil, OK?” says her dad. Now Emma (Bojana Novakovic) is an entry-level employee at Northmoor in Northampton, where she digs up shoddy deals to build “jihadist dirty bombs.” Martin Campbell (“Casino Royale”) directs a screenplay by William Monahan (“The Departed”) and Andrew Bovell (“Lantana”) that’s adapted from a 1985 BBC miniseries originally written by Troy Kennedy Martin. Darius Jedburgh (Ray Winstone) is a fixer-for-hire with intriguing tastes and theories. His supporting character outstrips Gibson’s standard-issue role. Most tiresome is the double-barrelled endorsement of extrajudicial execution, although a few in a word-of-mouth audience cheered each and every one of these deaths. “Edge of Darkness” attacks Boston cop culture where cases tagged “officer involved” are handled with greater care. Another local dis is implied by depicting Emma, who earned a M.S. from MIT, as knowing no way to leak her Northmoor dirt to the media. With Danny Huston, Shawn Roberts, David Aaron Baker, Jay O. Sanders, Denis O’Hare, Damian Young. 117m. (Bill Stamets)