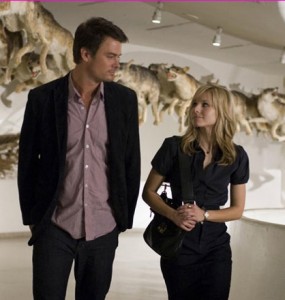 Specifying what is not working in this uncomic and unromantic film is what a constructive critic ought to do. But for this uninstructive film, it’s not worth the bother. “I wanted to make a comedy with romance, versus a ‘romantic comedy,” spins director Mark Steven Johnson (“Ghost Rider,” “Grumpy Old Men”), who claims he’s “blowing out a lot of the conventions of a traditional romantic comedy.” Yet writers David Diamond and David Weissman (“Old Dogs”) bring in the usual genre ingredients, including the unlikely coupling of secondary characters who kanoodle in a church pew at the end. Is any unmarried woman in an American romantic comedy not obsessed with work and skeptical of love? Enter Beth (Kristen Bell from “Couples Retreat,” “Forgetting Sarah Marshall”). This junior curator at the Guggenheim Museum jets off to Rome for her little sister’s nuptials. Beth clicks with best man Nick (Josh Duhamel from “Transformers,” “Turistas”), a New York Daily News sports writer. After committing myriad faux pas at the wedding, Beth plucks four coins and a poker chip from the Fountain of Love in the square outside the church. They were tossed there by wishers for lovers. Magic strikes like lightning. Beth unwittingly picks up five bewitched suitors. She figures Nick’s otherwise welcome attentions arise from the Roman spell and not from true love. Johnson moves through cliches mechanically, like a projectionist moving celluloid through a projector: there is a baffling lack of heartbeats and punchlines in “When in Rome.” With Kate Micucci, Will Arnett, Alexis Dziena, Jon Heder, Dax Shepard, Bobby Moynihan, Danny DeVito, Anjelica Huston. 91m. (Bill Stamets)