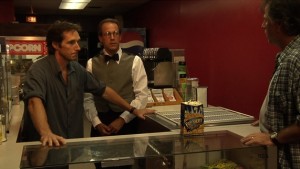 Chicago filmmaker Hurt McDermott’s feature follow-up to his Slamdance-premiered “Nightingale in A Music Box” (2002), filmed under the title “Silent E Squared,” is a latterday adaptation of Shakespeare’s “Much Ado About Nothing,” centering around the farcical romantic failures of the owner of a Lincoln Avenue art-house (the late Three Penny Cinema, shot after its closing in 2007) and spiraling outward with extremely tepid results. Taylor Nichols (“Barcelona”) stars as the fired-film-critic-turned-theater-operator who programs double features like “Safe” and “Poison” and expects to make a living; McDermott is the type of writer-director-editor who shows the letterboard as “Safe Poison” and expects an audience to chortle. Bits by local theater veterans Jim Ortlieb and Andy Rothenberg are pleasing as they go through their paces. The DePaul-area locations, even beyond the Three Penny, are time-capsule material already. 100m. (Ray Pride)